Swingin' Gates Brown; The Best Ever?

TRIVIA WINNER: Congrats to Mickey Bauchan of Flint, MI, who knew that Nellie Fox was the 1963 White Sox starting player with the least strikeouts (17). The Prize: Starbucks Gift Card.

ANSWER to the Trivia question in the previous column: Nellie Fox had the least strikeouts of any starter on the 1963 White Sox with 17.

Their names read like a who's who of non-position players. Indeed, they officially don't even have a position - at least not in the official annals of baseball, but they do exist. And, they are among the most important players in the game. They are the "pinch-hitters" or the PH in the boxscore. The guys whose only role is to bat for someone the manager feels, at the moment, is the lesser option to do what the team tries to do; win.

The likes of slugger Jerry Lynch of Cincinnati, high average Manny Mota of the Pirates and Dodgers, Vic Davalillo, Smokey Burgess, Bubba Morton of the Angels, all made their mark in the 1960's. It was said Mota could get out of bed on a Sunday morning and get a hit for someone else. However, there was one guy who had a marvelous year. So much so, he became what may have been the first player to ever have the designation by position as "Pinch-hitter" on his Strat-O-Matic Baseball Card; Gates Brown. 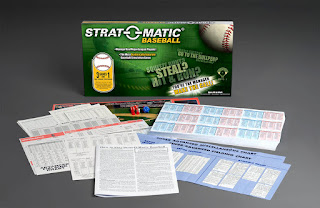 Brown was an awesome player when it came to coming off the bench cold and cranking out a hit. He broke into the big leagues with Detroit and in an auspicious debut, his first appearance was as a pinch-hitter on June 19th at Boston's Fenway Park. He came up to bat for Don Mossi in the fifth inning of a game the Red Sox were winning 4-1. He promptly smashed a Bob Heffner pitch over the wall for a home run in his first at bat in the bigs.

The following year Brown got the chance to play regularly and while still being used in the pinch, he did find time to bat over 400 times on his way to hitting .272 with 15 homers. 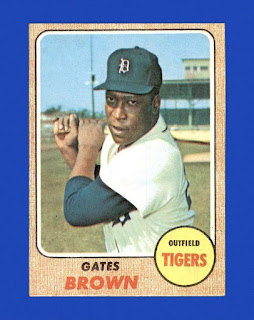 He could always hit and was used in various ways throughout the years but in 1968 he became a valuable part of the Tigers run to the pennant. He hit .370 in 92 at bats, smashing seven doubles, a pair of triples and six homers while driving in 15 and drawing a dozen walks. Brown was extraordinary. More importantly as a pinch hitter he batted .450 on the season! He appeared only 18 times in the field in his 67 games.

In the 1968 post season he only batted once and did not get a hit, but in later years he continued to bat well. In his career, Brown collected 107 hits batting for someone else, including 16 homers. The slugger holds the record for the most at bats in the AL by a pinch hitter with 414.

Brown died of a heart attack at the age of 74 and did some coaching before then with his beloved Tigers where he spent his entire career, finishing in 1975 with a .257 lifetime average. He will always be remembered for a great 1968 season when the Tigers took it all and Swingin' Gates Brown played a key role.


TRIVIA CONTEST; After reading this column you can enter the weekly trivia contest for a chance to win a Starbucks Gift Card. Enter via the following email. Send 1) your answer to the trivia question at the top of the column, 2) your name, address and email so where we know where to send the card if you win 3) any comment you have on the column. One winner will be selected at random each week based on correct answers with the odds being based on the number of correct entries.  Please cut and paste or enter the following email into your email system.
brillpro@gmail.com
==========================================================
I've written more than a dozen books including at least two sports books. You can find these at my Amazon page or at my own website www.bobbrillbooks.com. Please take a look at the sports books, the western novel series or the "Tattoo Murder," which is a crime book set in Ventura, CA.