ANSWER to the Trivia question in the previous column: Phil Niekro had more 10-game losing seasons than Brother Joe.

It's not often a player who misses the ball about half the time sticks around for more than a couple years in the big leagues, but then again there was Dave Nicholson. Nicholson might have fit right in, in today's free swinging-home runs-at any cost atmosphere. In the 1960's though, Nicholson was a rather strange player. 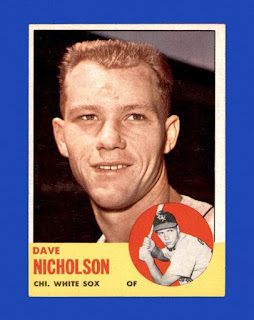 In 1419 major league at-bats, he struck out 573 times. It was an amazing 40 percent of the time he came to the plate and walked away without hitting the ball fair. When you consider the fact he only walked 219 times, the whiffs were problematic. He was a slugger but never really achieved slugger status.

The height of Nicholson's ineptness came with the White Sox in 1963. It was his best overall year. He did hit 22 dingers, but only managed to eke out a .229 batting average. The mess started with his coming to the plate 520 time but with only 449 official at bats. In those 449 at bats he struck out 175 to lead the AL!

He did have 123 hits and drove in 70 runs. Imagine if he'd only struck out half as many times, how many runs he could have driven in. The Sox were a pretty good team in 1963 and deserved better. They finished second with 94 wins.

The following season Nicholson saw his playing time reduced and only batted 351 times but still managed to strike out 126 times while seeing his average dip to .204. It seemed the Sox had seen enough of him but couldn't really find any takers. 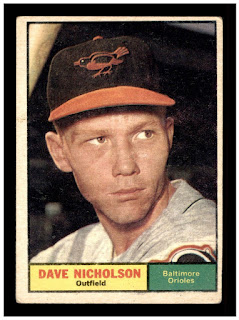 In 1965 he struck out 40 times in 85 at bats and that was the end of that. He was traded to Houston in a minor deal and improved on all his statistics after moving to the National League. He did bat 280 times with 10 homers, a .246 BA and only 92 strike outs in an Astro's uniform before being shipped off again. This time to Atlanta where he played in only 10 games before his career ended for good.

Swinging Dave Nicholson finished his career with a lifetime .212 BA and 61 home runs to go along with his 573 punch outs. In 568 major league games he averaged more than one "K" per game.