The Fateful Day the Angels Changed Their Name

TRIVIA WINNER: Congrats to Alan Drooz of San Diego, CA, who knew that Manny Jimenez played for the Columbus Jets of the International League. The Prize: Starbucks Gift Card.

ANSWER to the Trivia question in the previous column: Elmer Valo was the player in 1960 who came to bat 92 times, 81 as a Pinch Hitter.

In eight MLB seasons Marcelino Lopez pitched for five different teams but only had one "losing" season. Which season was that and what was his record?

What's in a name change? For the Los Angeles Angels the answer is "not much," at least at the beginning. Since their inception the Angels, who played at Dodger Stadium, were known as the Los Angeles Angels. They were the Hollywood version of an American League team, counteracting the Dodgers who had arrived less than a handful of years later.

However, the day they changed their name to the California Angels should have been something much stronger and brighter. It wasn't to be. The teams first game as the new CA Angels they faced the not so strong 1965 New York Yankees. An aging Whitey Ford was on the hill for the Bombers to face Marcelino Lopez. Lopez, as it turned out, wasn't up to the name change. 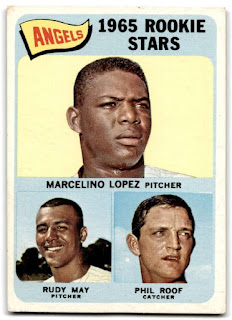 Inning number one. Bobby Richardson led off with a single. Tom Thresh doubled him to third. It was too early to walk Mickey Mantle but he should have. The Mick blasted one deep to left center field and it was 3-0 Yankees. Elston Howard singled, Joe Pepitone bunted him to second and after a Hector Lopez ground out, Clete Boyer singled him home, 4-0. Phil Linz singled before Ford, batting before ever throwing a pitch, grounded out. It was pretty much all over.

Tresh and Mantle combined for another run in the second before Rudy May came on in relief of Lopez. New York would score three more in the seventh while the Angels lone run came on a Jose Cardenal single to drive home Paul Schall. The final 8-1 New York. Ford went the distance giving up four hits. 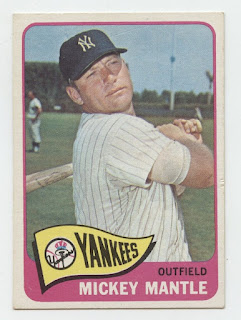 The Angels would go 13-14 the rest of the way as the California Angels. The club would remain that way until 1996 when they became the Anaheim Angels and then later the Los Angeles Angels of Anaheim. With the team for sale again, who knows what they will become next.