Roger Maris First Homers as a Yankee - Leading OFF

TRIVIA WINNER: Congrats to Bill Frieberg of Santa Fe, New Mexico, who among others knew I screwed up last weeks trivia question and entered everyone into the drawing. He was the lucky one. The Prize: Starbucks Gift Card.

ANSWER to the Trivia question in the previous column: Anyone who emailed me. LOL!

While Aaron Judge became only the third player in American League history to hit 60 home runs in a season he also solidified the way NY Yankee baseball is played. The only players to ever hit 60 in a season in the AL all wore Yankee pinstripes. Babe Ruth and Roger Maris both paid those dividends. However, in 1960 when Maris became a Yankee no one ever pictured him as a lead off man. But he was and he paid immediate dividends - twice with homers no. 1 & no. 2.

(The Roger Maris Game of Fame)

When Maris came over from the Kansas City A's the club wanted home runs not average. Why insert him into the lead off spot? It was a pretty ostentatious beginning too. New York opened on the road in Boston with a batting order which featured, in order, Maris, Richardson, McDougald, Lopez, Mantle, Skowron, Howard, Kubek with Jim Coates on the mound.

In the first inning against Tom Brewer, Maris hit a double. In the third he grounded out. In the fifth, after Coates had singled, Maris blasted his first home run of his Yankee career. It came off Brewer and gave New York a 4-1 lead. Leading 6-2 in the sixth Maris singled home Kubek for his third hit. This time Nelson Chittum was the victim. 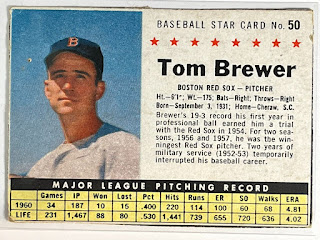 Ted Bowsfield took the mound in the 8th and after striking out Coates, Maris went deep again for no. 2. A long shot to right and his fourth hit. But he wasn't done. He drew a walk in his last at bat. His line score read 5-2-4-4 and a walk, getting four hits in five at bats with two homers, a single and a double only missing the cycle wanting a triple.

It should be mentioned Ted Williams also homered for the Sox in an 8-4 losing cause. Coates went the distance with a nine-hitter. Maris batted lead-off in game two before manager Casey Stengel decided Bobby Richardson should lead off and Maris was moved to the no. 4 slot behind Mantle.

Maris would finish the year with 39 homers, 112 RBI and a .283 BA. His On-Base percentage was .371 to his slugging percentage of .581. It was obvious he was better positioned to hit with men on base rather than trying to start a rally in the no. 1 slot.