When An Owner Screws UP; Charley O. FInley

TRIVIA WINNER: Congrats to Jim Depitro of Syracuse, NY, who knew that Elmer Valo was the player in 1960 who came to bat 92 times, 81 as a Pinch Hitter. The Prize: Starbucks Gift Card.

ANSWER to the Trivia question in the previous column: Elmer Valo was the player in 1960 who came to bat 92 times, 81 as a Pinch Hitter.

In the classic baseball film "Field of Dreams" Shoeless Joe Jackson tells Ray Kinsella in response to the farmer's reasoning for adding lights to baseball fields; the owners thought it would bring in more fans and more money if they could play games at night. Jackson (played by the late Ray Liotta) answers back "phh, owners." He did it with a dismissive response, basically saying owners can do more to wreck the game than anyone else.

Such was the case with a rising star in Kansas City, who fell to earth way before he should have. Manny Jimenez was an outstanding hitter in the minor leagues and upon making his debut in 1962, he seemed to be on track for stardom. Jimenez batted .301 with 11 homers for the Kansas City A's.

In his first game on April 11, 1962 in front of only 4,064 fans in Kansas City, he faced the Twins Camilo Pascual and got three of the teams four hits off the all-star pitcher. It seemed he was well on his way. It should be noted the next night he did not even start. It was okay as only 854 fans remember it. That was the total attendance at game three of the 1962 season. 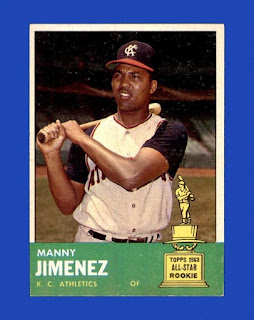 It was another week before Jimenez appeared again and he got a pinch hit in his only at bat. The season went on in strange fashion. When the dust settled on the A's season, they finished in 9th place out of 10 and won only 72 games while losing 90. Jimenez on the other hand capped an outstanding rookie season.

Not only did he bat .301, but slugged 11 homers and 24 doubles but he drove in 69 runs. Then in the off season owner Charlie O. Finley pulled Manny aside. He instructed him to stop trying to hit for average (he'd batted .340 in one minor league season) and to go for power. He wanted more home runs, like the Yankees asked Roger Maris to do after he was traded by the A's to New York. While Maris responded with 100 dingers over the next two years, Manny hit 12 over the next three years.

Not surprisingly, in his second year, the year after he debuted with 11 homers, he hit zero - none- nada! In addition, his average fell to .280, .225 and then .114. He was shipped off to Pittsburgh where he served as a pinch hitter and was out of baseball by the end of the 1969 season.

To take a rookie who could have been rookie of the year and turn him completely around, Finley later admitted what he did probably hurt the player more than helped. The proof was in the pudding.

Despite his devastating exit from MLB Jimenez did have some  highlights. He had three 4-hit games, including 3 home runs and 5 RBI against All-Stars Eddie Fisher, Sam Jones, Ken McBride, Camilo Pascual, and Juan Pizarro and hit a combined .429 (24-for-56) against Hall of Famers Whitey Ford, Ferguson Jenkins, Robin Roberts, Don Sutton, and Early Wynn. 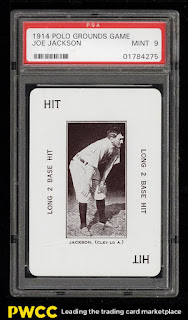