The Strange Case of Osteen Vs. Mays 1960

TRIVIA WINNER: Congrats to Craig McGraw of Middletown, DE, who correctly identified Hoyt Wilhelm as the pitcher who gave up Roger Maris' final home run as a Yankee. It was Wilhelm who halted Maris bid in 1961 to outdo Babe Ruth. The Prize: Starbucks Gift Card.

ANSWER to the Trivia question in the previous column: Hoyt Wilhelm gave up Roger Maris' final homer as a Yankee in his career.

Most fans know of the significance of the career and the history of former Dodger starter Claude Osteen. How he was a big part of mid-1960s Dodger championship teams. Most remember he was a key player in the trade which sent slugger Frank Howard to Washington. Few remember Osteen with his original team; the Cincinnati Reds. Fewer even remember the significance of his very first decision in 1960.

(A much later home run by Mays off Osteen.)

Osteen originally came up with the Reds in 1957 and pitched briefly over two seasons but failed to get a win or loss. Then on August 25th, 1960, he would make sort of history. It wasn't something records are made of but it sure likely stood out in Osteen's mind forever. It was future nemesis Willie Mays who gave him that loss and in the most unusual way.

Osteen got the start against Sam Jones of the Giants. He didn't last long, only 1 and 1/3 innings. He breezed through the first getting Jim Davenport, Joe Amalfitano and Mays. Meanwhile the Reds has staked him to a run, leading 1-0. 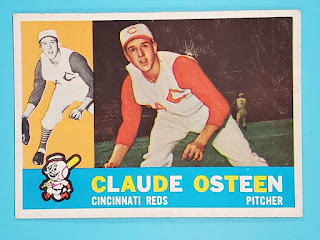 The second inning started off with a Felipe Alou flyout, but then things began to unravel. He walked both Willie Kirkland and Bob Schmidt after a single to Orlando Cepeda. That loaded the bases with one out. Eddie Bressoud and Sam Jones each hit singles and each drove in one run keeping the bases loaded with the score 2-1 Giants.

Davenport grounded into a force at second scoring a run making it 3-1 and he issued a walk to the pesky Amalfitano to load them up for Mays. Willie did not miss a beat. Mays smacked a ball into right field and as Gus Bell tried vainly to corral it, Willie raced around the bases for an inside-the-park grand slam home run and a 7-1 lead. 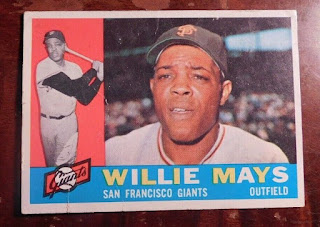 Manager Fred Hutchinson had seen enough. Bill Henry came into relieve Osteen and got Alou to ground out to end the inning, mercifully. The Giants won the game 8-5. He would not get another NL decision until years later with the Dodgers after he was traded to Washington for Dave Sisler following the 1961 season. He found a home there until the trade which sent him to Los Angeles and a brand new lease on life. And....many more encounters with Willie Mays and the Dodger/Giant rivalry.