ANSWER to the Trivia question in the previous column: Jerry Doggett was Vin Scully's sidekick and broadcast partner in the 1960s.

For the first time in 33 years the Boston Red Sox were to lose 100 games. It was 1965, just two years before the Sox with Carl Yastrzemski leading the way, won the American League Pennant. With a line-up of eight players 30 years old or more, it figured the team was going to need an infusion of young talent soon. Four players would fill that role.

A 20-year old slugger named Tony Conigliaro was a perfect fit for the Red Sox. A youngster with an Italian surname who could easily challenge the Green Monster, he immediately became a fan favorite. Dalton Jones at 21 would prove to be a capable and clutch hitter and at 23 Jim Lonborg was just scratching the surface of his talent. Also at 20 shortstop Rico Petrocelli was emerging. And Yaz was only 25. The other youngsters didn't make a dent and many would be gone soon enough.

Lee Thomas, Eddie Bressoud, Felix Mantilla, Dick Radatz and Frank Malzone, all found their way through the early 1960s in Boston but as the middle of the decade approached, they would soon be all but forgotten. In a year when the club lost 100 games, it was to be expected. Earl Wilson may have been the exception at 30 and was sent to Detroit for Don Demeter and Julio Navarro which turned out to be a bad and wasted move by Boston. 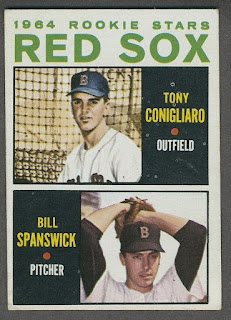 (You can see how bad the Red Sox were by the 'other' player on this rookie card.)

How bad was it? GM Mike Higgins was fired two weeks before the season ended, replaced by Dick O'Connell. The club would finish ninth in a 10 team league, 40 games back of champion Minnesota. They never lost more than eight straight but they never won more than four in a row. They were consistently inconsistent winning 31 games before the All-Star Break and 31 after it. The worst was in June and July when they won 17 and lost 42 games. The club had a streak of 3-14 at the start of June. They would finish the season losing eight of 10.

One of O'Connell's first moves was to try and shore up the infield. He worked a trade which was a disaster. On October 4, 1965 he packaged a deal where George Smith was traded by the Detroit Tigers with a player to be named later and George Thomas to the Boston Red Sox for Bill Monbouquette. Detroit would later send Jackie Moore to Boston to complete the trade. Smith would barely hit .213 and was out of baseball at the end of the 1966 campaign. Monbouquette was out of baseball two seasons later. Dick Radatz was also sent packing in a deal which brought starter Lee Stange and Don McMahon to Boston.

In 1966 they would again finish ninth but with a couple of key acquisitions who would serve them well in the run for the pennant in 1967. The team improved by 10 games but saw manager Billy Herman depart late in the season. First baseman George Scott and third baseman Joe Foy arrived. Two others made their debut in 1966. Reggie Smith and Mike Andrews who would go on to be stalwarts got their chance to show the Red Sox faithful, what this club could do. All were either products of the Sox farm system or were drafted a few years earlier from other clubs.