The Crazy Mixed Up White Sox

TRIVIA WINNER: Congrats to Ryan Lerman of Coral Springs, FL, who correctly answered the reason Orlando Cepeda didn't play the last four games of the 12 game win streak in 1966 was because he got traded to the Cardinals whom he'd just blasted. The Prize: Starbucks Gift Card.

If ever there was an "interesting" mix of youngsters and aging veterans on a team playing above their skill level, it was the 1963 Chicago White Sox. For a team with 94 wins and a second place finish, there was one statistic which stood out if for no other reason it shows how goofy this team was. Outfielder Dave Nicholson was second on the team in strikeouts to starting pitcher Gary Peters. Yep, Peters struck out 189 batters. Nicholson struck out 175 times!

The 23 year old Nicholson tied for the team lead in homers with 22. He tied Pete Ward. Ward also hit .295. Nicholson didn't come close at .229, but he also tied for third with RBI, trailing both Ward and Floyd Robinson who did it with only 13 homers. Ronny Hanson and Jim Landis also each homered 13 times. Three guys with 13 homers sounds like a lot of bad luck to me. 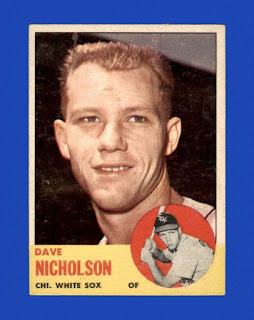 Of course the Sox had the ever present Cam Carreon behind the plate batting .274 and having his best season. The catcher was just about to embark on what would become a journeyman career. The following season he was replaced by J.C. Martin.

It was 22-year old Tommy McCraw and 35 year old Nellie Fox sharing the right side of the infield both hitting around .260. McCraw also tied for the team lead in stolen bases as he and Al Weis had 15 thefts. The bench included five more guys who had reached their 30's, and two more who were yet to reach 23. A 22 year old Ken Berry was in that group. He'd eventually become one of the best defensive players in the AL.

The pitching staff was solid and again mixed. Peters, Juan Pizarro and John Buzhardt were all 26-year old starters with Ray Herbert the oldest starter at 33 and Joel Horlen coming into his own at 25. The old man of the staff of course was 40 year old Hoyt Wilhelm. Jim Brosnan was hanging on at 33 while it was a 20 year old Bruce Howard and 22 year old Fred Talbot who would become solid major league players. 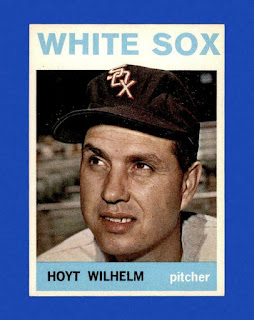 The club battled all year long but it was another NY Yankee season. Even closing out the season 15-4 the Sox would not overcome the 10.5 game lead New York had piled on. Still 94 wins was a major accomplishment.

The following season, with basically the same team, the White Sox actually improved to 98 wins but still finished second to the Yankees. In 1964 they gave Chicago fans hope, finishing just one game back of New York. Gone was Fox, while Bill Skowron came aboard, Wilhelm turned 41, Brosnan retired and Nicholson still led the hitters in strikeouts but he did cut them down to 126. This time, however, four pitchers out did him.