TRIVIA WINNER: Congrats to David Hubert of Mississauga, Ontario, Canada, who correctly identified Jeff Torborg as the catcher who replaced Johnny Roseboro after Roseboro was hit with a bat by Juan Marichal. The Prize: Starbucks Gift Card.

It's been said a great pitching staff can win a pennant. That may be true but you need to have a few hits along the way. The 1968 Houston Astros are a case in point. In the year of the pitcher, the Astros were right there with the rest of the league. In some cases they were better than the rest of the NL. The club led the league in strikeouts, was third in complete games and second best in home runs allowed. Still, the club finished 10th in a ten-team league and was 18 games under .500 and 25 games out of first.

In fact, the two most exciting things which happened at the Astrodome in 1968 were the above (see the video) 24 inning game between the Astros and Mets and the March college basketball game between Houston and UCLA.

Dave Giusti 11-14, Larry Dierker 12-15, Denny Lemaster 10-15, Don Wilson 13-16 and Mike Cuellar 8-11 all were solid starters. None of the had an ERA higher than 3.31 and Cueallar 2.74 and Lemaster 2.81 were even better. Between them they competed 49 games and tossed 10 shutouts. Their WHIPs were solid and aside from Dierker's 20 Wild Pitches, there was nothing to complain about. Even the bullpen was solid if not spectacular. 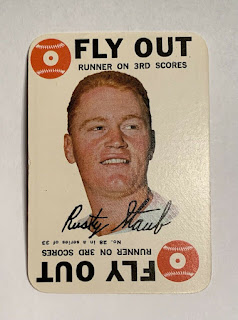 However, the pitching can be great but if you can't score runs, you lose. The pitchers only allowed 68 more runs than the hitters produced. Aside from Rusty Staub's .291 BA and Jim Wynn's 26 Homers, this was a team doomed to fail. (Staub was coming off a year where he hit .333 with 44 doubles). Wynn clubbed 26 of the team's 66 home runs! That means the other 25 hitters smashed 40 dingers between them, and four of them had six each. The list includes Staub.  After Wynn, not one batter hit more than six! The Astros finished at, or near the bottom in 13 offensive categories including 9th in stolen bases with 44. 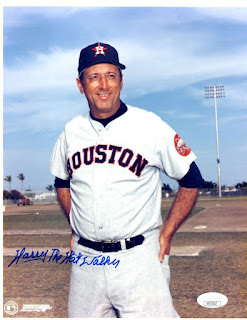 Even Harry "the Hat" Walker couldn't inspire this club to hit. Walker took over from Grady Hatton in mid-June with the club 23-38. Walker would take them to 49-52 the rest of the way. They immediately went on a 9-4 run but it was short lived. They could never put together more than a two game win streak until mid-August when they won 9 of 10. Houston actually moved up to 7th place. Then they hit a losing streak of 7-17 and it was pretty much all over. It was back to last and onto 1969.