The Streaking Giants of 1966

TRIVIA WINNER: Congrats to Bob Ibach of Chicago, IL, who correctly answered Jimmie Hall and Pete Cimino were the other players the Angels got in the Dean Chance for Don Mincher trade. The Prize: Starbucks Gift Card.

Anytime a team rolls off a dozen wins in a row, it's an amazing feat. When the team defeats Bob Gibson twice, Don Drysdale and Claude Osteen in a third of those victories and sends Sandy Koufax to the showers in the second inning, that is something else again. Case in point; the San Francisco Giants April 30-May 13, 1966. And the man who most benefited from the victorious run was Juan Marichal who won three games during the stretch.

While Marichal was great, Gaylord Perry was even better. While Marichal bested Drysdale and Art Mahaffey of the Reds, it was Perry who beat Gibson twice, 2-0 and 4-2. Perry was also pretty awesome that season, finishing 21-8 2.99 in 255 innings. He added three shutouts, one against the Cardinals in the streak. Perry gave up just four hits, Gibson only three. One of Gibson's however was a blast by Len Gabrielson which provided all the Giants needed. 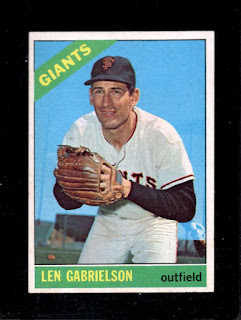 During the streak Willie Mays, Orlando Cepeda and Jim Ray Hart were the hitting stars. Mays blasted four homers, Hart and McCovey had three and Cepeda had a pair but drove in 13 runs in the 12 games.

The streak almost came to an end against the Pirates when Steve Blass held the Giants to one run in 10 innings. The Bucs couldn't score more than one and the game went to the 15th when Gabrielson again brought the winning run home with a ground ball out. The Mets ended the streak finally.  When it was over the Giants were 22-7 and leading the NL by 4.5 games. They would finish second to the Dodgers.