TRIVIA WINNER: Congrats to Kel Kissamis of Hampshire, IL, who correctly identified the highly touted Jim Brosnan book "The Long Season" as the book we were asking about. The Prize: Starbucks Gift Card.

Five times the man with the most varied pitches in his arsenal, completed at least 20 games and pitched 30 complete games in 1968. Five times he issued less than 50 walks and six times he struck out over 200 batters. Amazingly his WHIP was under 1.0 four times during the stretch. He never lost more than 13 and in 1965 he tossed 10 shutouts. He would throw at any angle and speed. 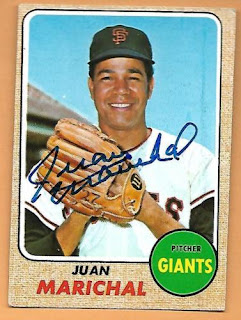 Yet, despite all of this he is best remembered for the time he took an outrageous turn and smacked the Dodger's Johnny Roseboro over the head with a bat, while standing in the batters box.


It was a Sunday afternoon on August 22, 1965 and my father and my God Father and I were on our way to the Olympic Auditorium in Los Angeles to see wrestling. My father was a major fan of "wrastlin'" and the Olympic Auditorium was the place to be for that sort of thing.  We were listening to the Dodger game on the radio and were appalled and shocked at what we heard as we pulled into the parking lot.

Up in the Bay Area, the Giants were hosting the Dodgers with Sandy Koufax facing Marichal. Two of the best pitchers of the era and of all-time as it would turn out, in a game both teams wanted to win as they battled it out in the closing days of the 1965 NL pennant race.

The game started off tense. Maury Wills laid down a bunt single and the second time around, Marichal decked him. Koufax returned the favor by sending Willie Mays to the ground with a high fastball. When Marichal decked Ron Fairly, umpire Shag Crawford warned both teams. An ejection was coming the next time a pitch was too tight.

What happened next is documented by both players. It was such an important game for both teams, both sides were making sure their pitcher would not be the one ejected for throwing at a hitter. They were not. It was Marichal and it came as a hitter.

In the third inning Koufax sent a pitch inside. Roseboro dropped the ball on purpose to get a good angle on Marichal who was at the plate. He positioned himself and whipped a throw back to Koufax which came dangerously close to Marichal's face. The Giant's ace said it actually did clip his nose. 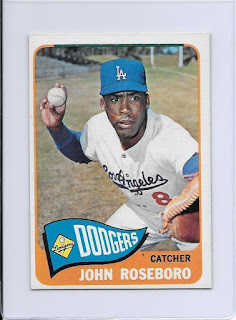 Juan confronted Johnny and the two had heated words. Roseboro moved closer. Then it got ugly. Marichal clubbed Roseboro over the head with his bat. Roseboro went down and both benches emptied. A bloodied Roseboro went after Marichal and kept the pounding up until Mays came out and restrained him, bringing some peace to the party. Marichal, bat in hand, was tackled by the umpire.

"I was afraid he was going to hit me with his mask, so I hit him with my bat," Marichal said in an apology a day later.

No one was in a forgiving mood.  Bat versus mask. Hmmm. Doesn't seem like a match. Roseboro got 14 stitches, Marichal was fined $1750 and was suspended for 10 games. Roseboro did sue and the case was eventually settled for $7500.

As for the game itself, a visibly shaken Koufax gave up four runs to the Giants, including homers by Mays and Cap Peterson. The final was 4-3 but Marichal was not the recipient of the win. Ron Herbal was. The Dodgers would go on to win the pennant and the World Series over the Twins.

Believe it or not the two men later became friends. When Roseboro died in 2002 at age 69, Marichal was one of the pallbearers and a speaker at the funeral. Marichal actually spent his last season at age 37, with the Dodgers in 1975.