When it comes to monumental moments few players get the chance to achieve them and when it's a major player who ends up with a history of monumental moments, it becomes what baseball is all about. One of those moments occurred on April 17, 1964. It was Opening Day, the first of many Opening Days at Shea Stadium, New York. While the seasonal Opening Day took place a few days earlier, the first home-stand ever at Shea was against the Pirates on the 17th of April.

The game pitted the hapless Amazin's (before they were the Amazin' Mets) against a really good Pittsburgh team in transition. The likes of Clemente, Mazeroski and Virdon were still there but many of the players from the 1960 World Series team had moved on. The big guy on the scene however was future Hall of Famer and beloved player Willie Stargell.

The first inning saw the Bucs and the Mets go down in order. Bob Friend (little more than a year away from being a Met) was on the mound for Pittsburgh facing Jack Fisher. Everyone was waiting for that very first hit at the new yard. Would it be a Met, as most of the 50,312 fans in attendance hoped it would be? Or, would it be spoiled by some visiting Pirate. 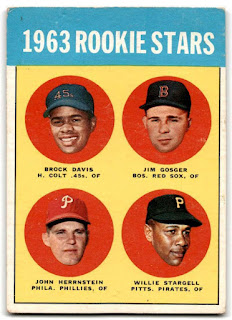 The faithful didn't have to wait long. Leading off the top of the second inning was Stargell. Pinwheeling his bat facing the right-handed Fisher, Stargell blasted a shot deeeep to right field, some 350 feet away and history was made. The Bucs led 1-0 and it was a Pirate who went into the record books. Bob Bailey added a single in the inning to rub it in. It wasn't until Tim Harkness singled in the third a Met got a hit.

The New Yorkers would push across their first run when Ron Hunt doubled in the fourth and rode home on a single by future Bucco Jesse Gonder. In the fifth Stargell would double in another run off Fisher who lasted into the seventh before giving way to Ed Bauta. The game ended 4-3 with Friend going the distance, pitching a 7-hitter for his first win of the season. The Mets were 0-4. They would win their first game two days later.

For Stargell on the day he would go four-for-five, score two and drive in two. Known for his big hits you can follow his career at this link, and as the only man to hit home runs over the right field roof at Forbes Field more than once (he did it 7 times) "big" is a word too small for Wilver Stargell.