1965 Reds Blow It Down the Stretch

TRIVIA WINNER: Congrats to Dennis Cimpl of Wauwatosa, WI, who correctly answered Ron Kline led the AL in Saves in 1965 with 29. The Prize: Starbucks Gift Card.

Before they were the Big Red Machine the Cincinnati Reds of 1965 were just about the most awesome hitting team in the Majors. Look at it this way; they had two players reach 200 hits, every player in the starting line-up hit home runs in double figures, three guys scored 100 or more runs and two drove in well over 100, four of them hit 30+ doubles and three had at least 10 triples. Now that is awesome.

The 1965 Reds battled the entire season spending 17 days in First. If they hadn't hit the skids down the stretch, losing seven of their last eight, they might have ended up in the World Series. It was not to be. The buzz saw was the West Coast. Losing to Houston first, then three to Los Angeles and then a big win against the Giants before dropping the final three.

In seven losses they just stopped hitting. The Reds pushed across just 10 runs in the losses, but they scored 17 in the lone win against San Francisco. If they'd just have spread out those runs the pennant loomed. Sammy Ellis won that one but the rest of the hurlers were on the mark despite the losses. Maloney, Jay, McCool and Nuxhall were all solid. The hits just stopped. 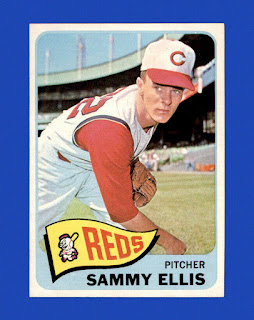 Aside from the 17-2 win, the club hit only three home runs in those seven losses, all three were solo shots in the same game the reds lost 5-3. In the 17 run game they belted four in a 21 hit barrage. It seemed as if they could only put it all together for one game.

When the dust settled on the 1965 season Vada Pinson had 204 hits, Pete Rose 209 and along with Gordie Coleman all of them hit .300 or better. Deron Johnson led the club with 130 RBI along with 32 home runs, while Frank Robinson in his final season in Cincinnati led the club with 33 homers while driving in 113 and scoring 109. Tommy Harper took the team lead in Runs Scored with 126 and stole 35 bases. 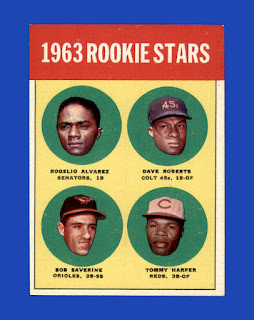 Finishing in fourth place with a respectable 89-73 record the Reds sported a pair of 20-game winners in Maloney 20 and Ellis 22. Billy McCool had 21 Saves. At the end of the year Robinson was traded to Baltimore and Johnson moved from third to Left to make room for rookie Tommy Helms. The club would finish in seventh place in 1966.