TRIVIA WINNER: Congrats to Rich Klein of Grand Prairie, TX, who correctly answered Alan Foster and Andy Messersmith gave up the Long home runs to Willie Stargell which he blasted out of Dodger Stadium. The Prize: Starbucks Gift Card.

From 1961-1963 the Boston Red Sox were the model of consistency. It's not the kind of consistent behavior anyone would want. In each of those three years the Red Sox won 76 games, they finished 6th, 7th and 8th. The curious thing was they finished with different loss numbers, losing 84, 85, and 86 games. In 1961 they played 163 games and had one tie. The other two seasons they failed to play the regular season 162.

The 1961 game 163 was the most controversial because it meant nothing in the standings. However, with Roger Maris sitting on 60 home runs for the season, it meant something to New York. It was also the game Maris hit home run no. 61 and gave the Yankees a 1-0 win. New York won the pennant by eight games over Detroit. 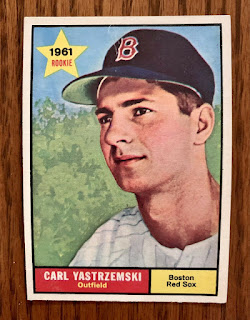 More importantly for the Boston faithful was the fact, 1961 ushered in a new era; the Yaz era. Ted Williams retired after the 1960 season and Carl Yastrzemski took over in left field. Williams, at 41, closed out his final season batting .316 and hitting 29 homers. Yaz first year saw him hit .266 with 11 homers. Hardly enough to get the chops of Red Sox fans eager for more.

It took time because the Sox would win their 76 games that year and in each of the following two years. They went through mainstays such as Frank Malzone, Jim Pagliaroni, Jackie Jensen, Pete Runnels, Chuck Schilling, Pumpsie Green, Dick Stuart, Gary Geiger, Earl Wilson, Bill Monboquette, Dick Radatz and Don Schwall before moving into 1967 when they turned it around and won the pennant.

During that stretch they never had a winning season. In 1965 they lost an even 100 games. From 1959 to 1967 they failed to break even. For eight straight seasons they were out of the race practically by the all-star break. But with the additions of players such as Joe Foy, George Scott, Mike Andrews and a center fielder named Reggie Smith, they finally got out of the second division.