The End of a Yankee Era 1965 Opening Day

TRIVIA WINNER: Congrats to Randall Bounds of Springfield, IL, who correctly answered that Sandy Alomar Sr. hit all 13 of his home runs in the American League. The Prize: Starbucks Gift Card.

Often in sports one thing leads to another and if the first thing is negative, then the next thing usually is too. Such was the case of Opening Day in 1965 for the New York Yankees. The Bombers lost the 1964 World Series in seven games to the Cardinals. It was the beginning of the Yankee slide which would not be resurrected for more than a decade. That loss led directly to the first game of the 1965 season. It was in all places; Minnesota where 15,000 fans would come out to see the team which would eventually end up in the World Series in October, 1965.

The game pitted Jim Bouton for New York against Jim Kaat for the Twins. It was a marathon. The aging Yankees still had the names; Mantle (who started in Left Field), Elston Howard, Roger Maris, Tom Tresh (CF), Clete Boyer, Tony Kubek, Joe Pepitone, Bobby Richardson and an outfielder named Art Lopez. Pay attention to that name. He played a significant role in this game. 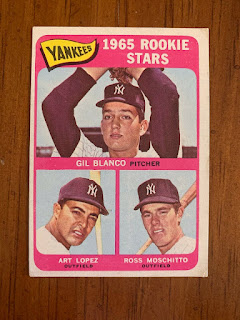 Aside from Howard's solo homer in the fifth, the game was uneventful when it came to the offensive side of the ledger. Mantle had one hit, as did Richardson and Tresh. Howard added a second hit. Kaat was keeping the Yanks at bay. Bouton went five innings and gave up four runs, two earned. He didn't help himself though with a pair of Wild Pitches.

He was relieved by Hal Reniff and then Pete Mikkelson and finally Pedro Ramos.  It is key to note here that with one out in the ninth, Mantle singled and was replaced by Lopez as a pinch runner, who would then take over in Left for Mickey. Howard grounded out sending Lopez to second. With two out Pepitone lifted a pop fly to third where Cesar Tovar couldn't make the play. Lopez running with two outs came around to score, and it was tied 4-4. Into extra innings they went. 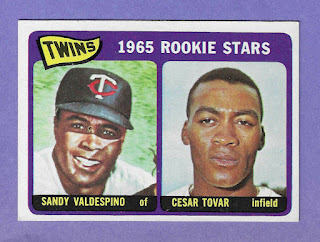 Neither team scored in the 10th and New York failed in the 11th. The bottom of the inning was where the rubber met the road. Bobby Allison led off with a flyball to left which Lopez misplayed and Allison ended up on third base with nobody out. Manager Johnny Keane gave the order to Ramos to intentionally walk both Rich Reese and Sandy Valdespino to load the bases. They were hoping for a force play at the plate with the infield drawn in.

Ramos went two better. He got Zoilo Versalles to pop out to short left and he struck out Jerry Kindall.  Then came time for Tovar  to redeem himself and he did with a single up the middle to bring home Allison with the winning run, 5-4.

The game was sloppy, a combined eight errors and three Yankee Wild Pitches. New York went on to lose five of the next eight games and finished in 6th place in the AL, 25 games back of Minnesota who won 101 more games and would take the Dodgers to seven games before losing the 1965 World Series. The 1965 season was the only one where Lopez appeared in the big leagues. In 38 games he came to bat 51 times and hit .143. He made just ONE error in his career.