It is time for the Fall Classic so we are looking back at 1960's Fall Baseball.

There were six World Series in the 1960s which went the full seven games but the biggest shocker (minus the 1960 Series) was the Orioles stunning four game sweep of the Dodgers in 1966. Three years previous Los Angeles had swept the Yankees in what would be New York's final World Series until 1976 or a 13 year drought.

The 1966 season was one of real transition. The Reds, who had traded Frank Robinson to the Orioles for Milt Pappas, lamented everyone of Robinson's 49 homers as he won the Triple Crown and the MVP in leading the O's to the Series. And every game Pappas missed due to a laboring arm didn't help. It would be the last Series for Sandy Koufax who retired after game four. And it was Don Drysdale's final trip to the Series as well. 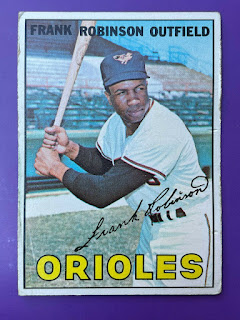 The key to the four game sweep by the O's over the Dodgers was timely hitting, inept Dodger fielding and great pitching - by the Orioles young guns. The Dodgers scored two runs in game one losing 5-2. They didn't score another run in the Series. Jim Palmer, Dave McNally and Wally Bunker each pitched 9-inning shutouts and Moe Drabowsky pitched six innings in relief giving up just one hit to gain the Game One victory. In his only appearance in the Series the relief ace struck out 11 batters in six innings including six in a row at one point. 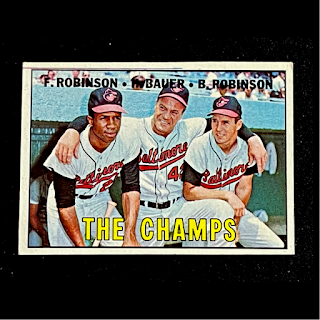 L-A scored two runs on 17 hits and only one homer. Jimmy Lefebvre knocked the only Dodger dinger for a club which had a few sluggers.  Frank Robinson hit .286 and slugged a pair of homers for the O's including a game winner. He knocked in more runs (3) in the Series than the entire Dodger team. It was such a dismal showing one of the key highlights is the ineptness of Willie Davis. The Dodger center fielder made three errors on two consecutive plays in Game Two. 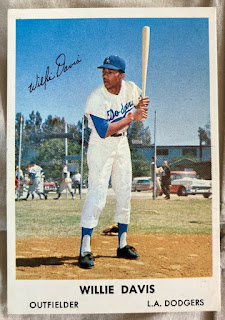 Dodger pitching was solid as usual. Claude Osteen and Don Drysdale each lost 1-0 affairs while Sandy Koufax lost 6-0 in game two. Drysdale started and lost Game One. The Dodgers batted an anemic .147. Rookie starter Don Sutton, a 12 game winner, never got into the series.

The Series was the end of the road for several Dodgers. Koufax and Jim Gilliam retired after the series as did Dick Stuart and Wes Covington. Maury Wills, Lou Johnson, John Kennedy and Tommy Davis were traded and several more would be gone the following season.  Names such as Ron Hunt, Ken Boyer, Billy Grabarkewitz, Billy Sudakis and Paul Popovich would replace them along with Bill Singer.