Gordy Coleman; Just One of Those Guys

TRIVIA WINNER: Congrats to Glenn Schubert of Bradenton, FL, who correctly stated there were two (you only had to know one) of the players from the last column who played against each other in the World Series. Al Bumbry played in the "79 Series against Jim Bibby and again in the "83 Series against Garry Maddox. The Prize: Starbucks Gift Card.

The 1960s were filled with guys who had solid careers, which if they played today they would be millionaires. Back then they were just "those guys" who made contributions to their teams. Gordy Coleman was one of those guys.

Coleman was a Cincinnati Red who was a slugger for a couple of years, a solid first baseman for several years and who homered in the only game his team won in the 1961 World Series. Still few people remember Coleman. 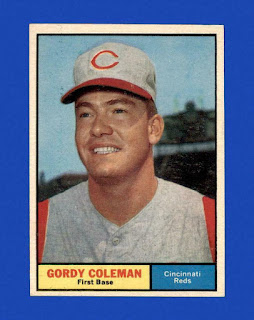 It took him six years to get to the big leagues and after a cup of coffee with the Indians he was traded in the winter of 1959 by Cleveland with Billy Martin and Cal McLish to the Cincinnati Reds for Johnny Temple. After a part time season in 1960 where he hit .271 he had a break out year in helping the Reds get to the Series in 1961. He slugged 26 homers and hit .287 in a lineup with featured Frank Robinson, Vada Pinson, Gene Freese and Wally Post. They were a power laden team but no match for the ultimate power team, the 1961 Yankees who beat them in five games. Coleman's two run homer came in the Reds lone victory.

Gordy continued to slug his way through the next season with 28 homers and a .277 BA but in 1963 his production waned trailing to 14 home runs and .242. By the time 1964 rolled around it was the beginning of the end for Coleman. The arrival of young clubbers Deron Johnson and Tony Perez forced him to the bench more and more often. 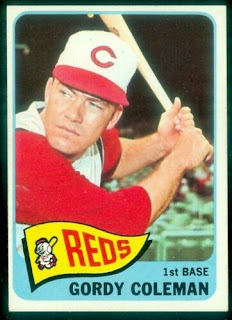 in 1965 he saw a resurgence batting .302 with 14 home runs in a limited role but two years later at the age of 32, his career had come to an end. His .271 career BA with 98 homers over nine years spoke of a solid if not remarkable baseball career. He never made an all-star team but in 1961 he did lead the NL in assists by a first baseman.