The Padres Who Prayed for Hits


The year was 1969 and the new San Diego team was far from it's days of Tony Gwynn and Dave Winfield. Gwynn would toy with .400 at one point and offer a lifetime BA of .338. Winfield, before leaving for Free Agency, would hit 154 home runs and lead the NL in RBI with 118 in 1979 in his Hall of Fame career. 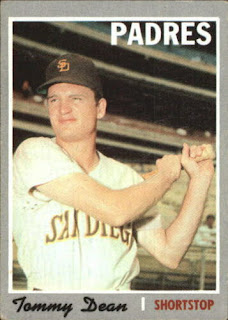 (Tommy Dean with a bat which seldom helped him.)


On the positive side, powerful Nate Colbert led the team in homers with 24, batting .255 while striking out 123 times (no big deal today but back then over 100 K's was a setback). Downtown Ollie Brown led the hitters at .254, adding 20 dingers, and Ed Spiezio and former Dodger Al Ferrara had double figure home run totals with 27 between them. The basic starting lineup rounded out with Cito Gaston's .230 mark.