Bud Daley Puts the Yankees Over the Top TWICE; 1961

When you think of Yankee pitchers making their mark in the 1960s, you normally think of Whitey Ford.You don't think of Bud Daley. Daley however was the man who pitched the 1961 Yankees (the second greatest team of all time) into first place basically to stay. It was game 80 on the season. Just one month earlier he was toiling for the Kansas City A's. The A's traded him
to the Yankees for Art Ditmar and Deron Johnson. He was 4-8 before the trade. It was the beginning of two milestones for the lefty hurler in 1961.

To put it nicely, almost any pitcher would have this claim to fame on Friday, July 7th evening in front of 29,000-plus at Yankee Stadium. The Bombers put 14 runs on the board against the Red Sox but it was Daley who was on the mound and went the distance.  Bud worked quickly that game which went 2:45 despite 17 runs being scored. 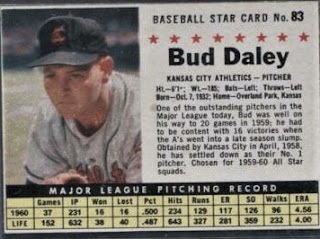 He gave up eight hits, walked two and struck out three and the only deep ball he allowed was late in the game to catcher Jim Pagliaroni. Otherwise he kept Boston in check. The Yankees had a field day against four Red Sox pitchers. Gene Conley opened the game and lasted just one frame, giving up six runs. Arnold Earley went the next five and by the time he was relieved New York had scored 10 of it's 14 runs. Dave Hilman and Billy Muffett left their marks as well.

New York did what it did best but only Elston Howard homered. Bobby Richardson and Roger Maris each drove in three runs while Howard plated four more. Mantle had a couple of hits as did Bill Skowron.

While the club had won the two previous games, this win pushed them into first place. And aside from a couple days when they fell to second the Bronx Bombers pretty much clinched the AL Pennant. With this win they went on a 25-9 run, dominating the American League and heading into the World Series.

While their were many bigger names in pinstripes in 1961 including Maris and his 61 homers, Mantle's .317 and 54 HR along with Berra, Ford (25 wins) and Luis Arroyo (15-5, 29 Saves), it was a career 60 game winner named Bud Daley who put them on the train to the title in game 80. Daley finished the campaign 8-9 with New York and coupled with his 4-8 in KC, he ended the season 12-17. He  picked up a win in two relief appearances in the World Series, including getting Vada Pinson to pop up as the final out in the 1961 Series.

Thank you to those of you who purchased my book after reading this column.
Posted by Baseball in the 1960s at 2:14 PM