TRIVIA WINNER: Congrats to Rich Klein or Grand Prairie, TX, who correctly stated the player whom Darrell Evans pinch-hit for was Claude Raymond (adding he of the unzipped fly in the 1966-67 Topps cards). The Prize: Starbucks Gift Card.

By the time 1960 rolled around, Warren Spahn had already won 20 or more games in a season nine times. He was 39 years old when the 1960 season began and no one could have foreseen the Braves hurler would add three more 20 win seasons to his total. No one in their right mind would expect him to match his single season record of 23 wins at the age of 42, in 1963. 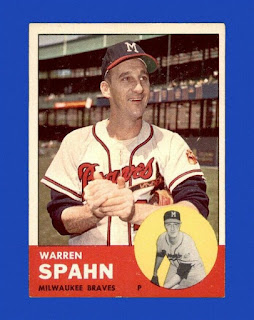 The '63 season was a rather strange one for the Milwaukee Braves. The starting pitching was not bad but not spectacular, aside from Spahn. Spahn completed 22 of his 33 starts for 259 innings on his way to a 23-7 record. Overworked Denny Lemaster registered a 3.04 ERA but pitched 31 of his 46 games as a starter. His 11-14 record showed his overwork. The bullpen was a mess.
(Spahn's 300th win)
On the offensive side of the ledger, the usual suspects performed as usual. Hank Aaron had 44 homers again to match his uniform number, Eddie Mathews hit 23 and drew nearly as many walks (124) as hits (144). 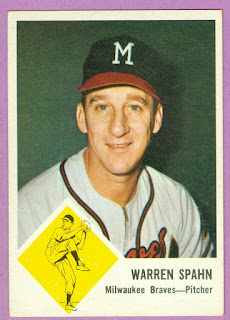 The Braves could score runs in bunches and while there were a couple close games early on, Spahn was 4-1 by the end of April. Included was a 4-hit shutout of the Phillies. In May he was 3-2. June saw him pick up a 4-0 record with a pair of three-hit shutouts. Again he blanked the Phillies and then shutout the Dodgers, besting Don Drysdale 1-0.

July was a little sloppy for Milwaukee but the ace still managed a 2-2 record with another shutout, this time against the Astros. He was unstoppable in August taking it to a 5-0 record. September was magnificent with a 5-2 record. There was a 3-hitter to shutout the Cubs and then on the final day of the season, with nothing hanging in the balance, he bested the Cubs and Bob Buhl just eight days after blanking the Cubs and Larry Jackson. This time it was a three hitter 2-0 in 1:38.

He was pitching like he was double parked and ready to head on home. He did in grand fashion. Two years later he retired, having won only 13 more games, the final season with the Mets and Giants. He was 44 years old, and finished with 363-245 record. His 3.09 ERA was strong and his 363 wins is good enough for 6th all time, and of course Cooperstown.

Thank you to those of you who purchased my book after reading this column.
Posted by Baseball in the 1960s at 6:11 PM