Sometimes a pitcher just runs a string of bad luck, but not often as the string of bad luck Barney Schultz had in September 1961 game. Pitching for the Cubs in relief against the Phillies, Schultz just did not have it. In fact, it was one of those games where he probably left the mound, headed for the locker room and slammed his glove against the wall. And unfortunately for Schultz, it did not stop there.

The game on September 10th, 1961 started with a pair of solid pitchers. The Phils sent Robin Roberts to the mound against Don Cardwell. Chicago sent Roberts to an early shower, scoring six runs before Roberts was pulled in the fifth. Don Cardwell was pitching well up until that point as well.

Cardwell's demise came in the 7th when the Phillies scored five runs including a grand slam by Don Demeter. That blow signaled the end for Cardwell who was still in line to be the winning pitcher. That is, IF, Barney Schultz and the Pen could hold Philadelphia. It was not Schultz's day. 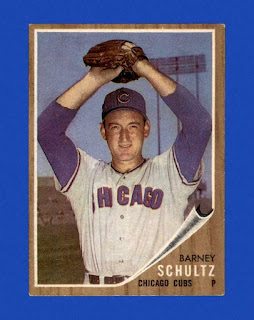 After giving up a single to Wes Covington, he hit Charley Smith. Then he uncorked a wild pitch. After walking light hitting Clay Dalrymple and Ruben Amaro, he was replaced by Bob Anderson. He did not record a single out. Before the inning ended all of the batters Schultz faced, scored.

The Phillies scored seven runs that inning and six in the next and won 14-6. Schultz was credited with a Blown Save and the Loss. But it wasn't over for Barney. The next night he gave up two earned runs on two hits in one-third of an inning. Following on that he pitched in his third consecutive game and took the loss pitching two thirds of an inning, giving up a run on two hits and a walk. We should point out the run was unearned.

Of course there was that other inning where Schultz did not get an out in the 9th inning of Game Three of the 1964 World Series. He faced lead-off batter Mickey Mantle with the score tied 1-1 and gave up the Walk Off homer (see video above).