TRIVIA WINNER: Congrats to Bob Ibach of Chicago, who correctly said three of the New York Yankees in last week's column highlight, were enshrined in the Hall of Fame. ** The Prize: Starbucks Gift Card.

===============================================================NEW TRIVIA QUESTION:  In th 1960 World Series, which Pirate infielder had the exact same Batting Average in the Series as he did during the regular season?
ANSWER to the Trivia question in the previous column:  There were three NY Yankee players enshrined in the Hall of Fame from last weeks column, however, ** it should be noted Yankee shortstop Tony Kubek is in the broadcasters awards section as well. The answer we were looking for though was three; Mantle, Berra and Ford. And as most of you pointed out, it's hard to imagine there are only three from that line-up.

(The highlight on this column comes at 6:31 of the above video which covers the entire series.)
Game one of the 1960 World Series was remarkable for a number of reasons. Off the top, it marked the first time Pittsburgh had been to the Fall Classic in 35 years when they lost in 4 straight to the 1927 Yankees. The new Yankees were the team of the previous decade and a new one was underway. The question most asked, "could they continue their winning ways?" Most importantly however, this game is marked by a little known fact.
Everyone who follows baseball remembers Bill Mazeroski's walk off home run in the last inning of the seventh game to win it for Pittsburgh. A series otherwise dominated by Yankee home runs and bats. Few people remember Mazeroski also hit what was the game-winning home in Game One, when the Bucs beat the Yanks 6-4.
It was certainly what New York was looking for in a hitters game except for the final score. They pounded out 13 hits to the Pirates six. Roger Maris and Elston Howard both homered, lead off hitter Tony Kubek slapped three hits as did Maris. Maris homered in the first to give New York a 1-0 lead off Vern Law. The Deacon, as he was known, won 20 games for Pittsburgh in 1960. 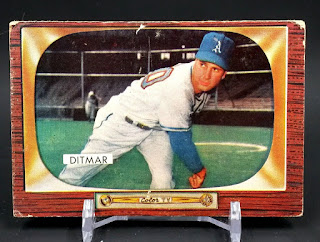 In the new age of baseball on television, pitching however faltered. Art Ditmar didn't make it out of the first inning as the Bucs' Bill Virdon started things off with a walk. Virdon, a future manager with the Yankees, promptly stole second and advanced to third on an error by Kubek at short. NL Batting Champion Dick Groat doubled in Virdon. Bob Skinner singled in Groat and with one out Skinner stole second, then scored on a single by Roberto Clemente. Jim Coates relieved Ditmar and brought the inning to an end, but the Bucs led 3-1.
Law sailed along until the fourth when a single by Moose Skowron drove home a run, making it 3-2. In the bottom of the fourth after a one out walk to Don Hoak, Mazeroski promptly belted an offering from Coates deep over the left field wall. It gave the Pirates a 5-2 lead and few in Forbes Field (including Mazeroski) realized it was a sign of things to come. They could not have realized either that this homer put the Pirates ahead for good; thus the game winner.
In the sixth Maz would single and come home on a hit by Virdon giving the Pirates their sixth run. New York scored in the ninth on Howard's two run home run but by then it was all over. Fireman Roy Face pitched the final two innings in relief of Law to save the win for Pittsburgh. 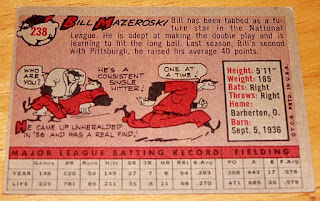 The rest of the series featured the things legends are made of. New York would go on to outhit, outscore, out homer and basically annihilate the Pirates in their three wins, 16-3, 10-0 and 12-0. Even in the decisive seventh game they scored 9 rungs, but with Maz's homer in the bottom of the ninth the Pirates scored 10. It was the only time Pittsburgh scored in double digits in the series.
Pittsburgh scored only 26 runs in the series. New York scored 55. The hits gap was 91-60 and the home run gap 10-4. Mazeroski hit half of those. Maz hit only 11 in the entire 1960 regular season. Mickey Mantle hit three while Maris and Skowron each banged two. When it came to pitching Whitey Ford won two complete nine-inning games with an amazing WHiP of 0.72. Pirate starters Law and 34-year old Harvey Haddix each won two games, 18-game winner Bob Friend lost a pair and little Elroy Face picked up three saves. Still it was Game One which set the tone for what had become an improbable World Series victory.
The seventh game in 1960 remains the only "walk off seventh game homer" in the history of the World Series. It's made Mazeroski a true legend and despite his amazing defensive credentials, it helped catapult him into baseball's Hall of Fame. It should be noted Yankee second baseman Bobby Richardson was voted Series MVP (the only time a player on a losing team was so honored in the World Series). However, it must be remembered the voting for the MVP takes place before the game actually ends, and if it had occurred after the game, it's highly likely Mazeroski would have won that award.

Thank you to those of you who purchased my book after reading this column.
Posted by Baseball in the 1960s at 1:17 PM