Every once in a while an athlete gets multiple opportunities but just keeps saying "no." Eventually, if the player is good enough, he makes the grade. Darrell Evans was just such a player. Evans came from a baseball family. His father was a professional fast pitch softball player, his Uncle Bob Evans played in the Cardinals organization and his grandfather Dave Salazar played in the White Sox system. Evans was destined if not reluctant.

He was drafted by the Cubs right out of John Muir High School in southern California in 1965. He chose to go instead to Pasadena City College. In January of 1966 the Yankees drafted him in the second round. He was leading both the baseball and basketball teams to championships at PCC and had hoped to get a full scholarship to USC. The latter didn't happen but he did score 12 points against the Lew Alcindor led UCLA Bruins.

Choosing to stay in college the Tigers drafted him later that year. College beckoned again as he was killing it at PCC. The Phillies and the A's drafted him in 1967. We don't know what his PCC basketball coach Jerry Tarkanian said to him but Evans was named to the school's Hall of Fame.

Later in 1967 he finally decided to become a pro baseball player and signed with the A's for $15,000. He finished the season at .326 with a pair of homers but found his way into the United States Marine Corps. A sore arm after his commitment to the military left him with a sad 1968 at .241. The A's had seen enough. They left him unprotected in December and Braves decided to take a chance for $25,000. They would never regret it. 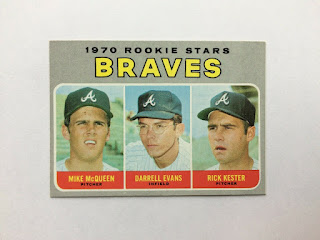 While Evans was called up in 1969 he didn't play much. His major league debut on April 20th in the expansion 1969 season saw him pinch-hit against the Red Jim Maloney who was on fire. Maloney would pitch a six hit complete game win and Evans struggled to get a fly ball out in his only appearance. In 12 games he came to bat only 28 times and hit .231 with no home runs. But while 1969 closed out, Evans went on to a great career in the big leagues.

Before it was over "Howdy Doody," as him teammates called him, would bang 414 home runs in a 21 year big league career. He hit 41 and drove in 104 in his breakout 1973 season. He would hit 40 again playing for Detroit becoming the oldest player ever to lead the AL in homers at age 38. Evans was also the first player to hit 40 homers in each league. There were several productive seasons with the Giants, too. In 1989 he finished up where it all began in Atlanta, hitting his last 11 home runs. After his playing days were over Evans managed several minor league clubs.

Thank you to those of you who purchased my book after reading this column.
Posted by Baseball in the 1960s at 11:07 AM