TRIVIA WINNER: Congrats to David Wright of Wilmington, DE who correctly stated Red Schoendienst was the other Cardinal Hall of Famer who retired during the 1963 season. The Prize: Starbucks Gift Card.

September 1, 1968 was a significant day in baseball history because it was the day which gave hope there could be a 30 game winner in the modern era. Until then only Sandy Koufax had won 27 games (1966). Before that you had to look back to 1956 when Don Newcombe won 27, 1952 when Robin Roberts won 28 and no one had won 30 since Dizzy Dean in 1934. Then, here comes Denny McLain.

With 30 days left in the 1968 season McLain got lots of support against the second place Baltimore Orioles that fall day. Facing 17 game winner Jim Hardin, McLain would go the distance, limiting the O's to three runs on seven hits while striking out nine. He would run his record to 27-5.

The support came mainly from center-fielder Mickey Stanley and right-fielder Jim Northrup. Each had three hits with Northrup blasting his 17th homer of the season in the first to counter Curt Blefary's first inning homer for the Orioles. The score was tied 2-2. 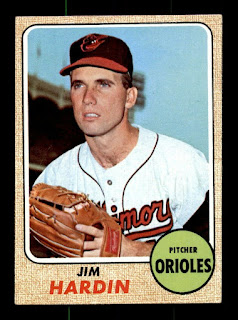 Hardin didn't last long. As wild as wild could be he was gone in the second after walking four batters and uncorking three Wild Pitches!! Manager Earl Weaver had seen enough. With Hardin allowing four runs, he brought in Wally Bunker who walked one of the two batters he faced before giving way to reliable Pete Richert. It didn't matter.  The game at that point had been decided.

The Tigers went on to win 7-3 and McLain had his 27th win on his way to 31 in the Tigers pennant winning season of 1968. The O's finished in second place 12 games back.