To Wine and Dine in Philly

TRIVIA WINNER: Congrats to Glenn Schubert of Bradenton, FL who answered Ralph Terry as the pitcher who went undefeated with a 5-0 record for the Yankees against the Minnesota Twins in 1962. The Prize: Starbucks Gift Card.

ANSWER to the Trivia question in the previous column: Ralph Terry as the pitcher who went undefeated with a 5-0 record for the Yankees against the Minnesota Twins in 1962.

Every once in a while a guy has a career day in the major leagues and for light hitting Philadelphia Phillies shortstop Bobby Wine it was April 26, 1964. The victim was the Cubs Freddy Norman. No one would ever mistake Wine for Ted Williams, or even Ron Hansen but the slick fielding shortstop had one of his best days ever at the plate as the Phils took on the Cubs in Philadelphia in a day game. It was a leisurely Sunday afternoon in eastern PA and a little more than 12-thousand of the Phillies faithful turned out to see Norman take on Ray Culp.

(Bobby Wine discussing the Collapse of 1964)

Wine, who was 0-6 in previous two games, was batting in his usual no. 8 spot in the line-up. The lifetime .212 hitter would face Norman who didn't have much that day. In the second, after a Gus Triandos solo shot to give the Phils a 2-0 lead (Tony Taylor had homered earlier), Wine grounded out. To add insult to injury (both to Norman and Wine), pitcher Culp followed with a walk.

Wine singled in the fourth but was left stranded. However, it was in the sixth that Wine made his move. With two outs Danny Cater whacked a double to left. Cubs skipper Bob Kennedy ordered Norman to walk Triandos  intentionally to get to Wine. Phillies manager Gene Mauch might have thought about hitting for Wine but chose to stay with his defensive shortstop late in the game. Good thing. Wine belted a Norman pitch deep into left field for a three run homer and a 5-0 Phillies lead. 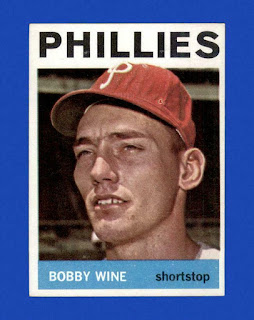 That was all she wrote. Wine did come to the plate one more time and grounded into a double play. The game ended 5-1 with Wine getting two hits and driving in three runs. After the game Wine was up to his old self. He didn't get another hit until May 4th when he singled off Roger Craig, nine days later. For the season he would hit .215 with four homers among his 15 extra base hits. But in 1964 that was the least of the Philadelphia Phillies problems.