ANSWER to the Trivia question in the previous column: 5'4" Freddie Patek sas the "other" shortstop Bill Mazeroski played with in the later years, as Gene Alley suffered through injuries.

The Minnesota Twins of 1962 proved one thing if nothing else during the season; If you can't beat the best team in the league, then you can't win the pennant. The Twins finished 5 games back of the Yankees when all was said and done. They played .500 or better against every other team in the league and close to it against against Boston (winning 8 of 18). However, against New York, which eventually went on to play the Giants in the World Series, they were a miserable 7-11, giving up 6 runs a game.

The Twins won 91 games and still finished second despite having a well balanced club. Every one of the regular starters belted homers in double figures but none hit .300. Vic Power's .290 topped the club. Harmon Killebrew led the parade with 48 homers and 126 RBI. Bobby Allison chipped in with 102 RBI on 29 homers. Rich Rollins and Lenny Green led the team in Runs with 97 and 96 respectively.  Add the likes of Zoilo Versalles, Bernie Allen and a young Don Mincher to the mix and they were solid. Even rookie Tony Oliva, a year away from stardom chipped in getting 4 hits in 9 AB.

On the mound every regular starting pitcher finished with at least a .500 record save one; Jim Bonikowski was 5-7 in 13 Starts in his only year in the big leagues. Camilo Pasqual won 20, Jim Kaat was 18-14 and Jack Kralick was 12-11. Dick Stigman was 12-5. Today we would find it remarkable that the big three combined for over 750 innings. Pasqual with 257, Kaat 269, and Kralick 242. Amazing! 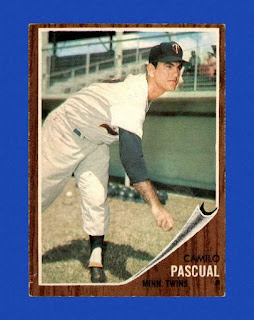 But it was the Yankees who did them in. In May and June they lost 4 of 6 and in July they dropped all three contests. On two other occasions they split a pair.  They last time they played New York was in late August and they could only win two in a four game set. While the Twins played well down the stretch, they could never get closer than two games. Heading into the final week of the season they had to play six of seven games against Baltimore and won four of them to finish five games back. New York though finished strong winning 11 of 16 to capture the title winning 96 games.

The Twins would be back, again winning 91 the following year. They finished third to New York, this time beating every team in the league except the Yankees and won only 6 games this time. In 1964 they faltered miserably finishing 6th. It wasn't until 1965 Minnesota led by Mudcat Grant, Kaat and Jim Perry, plus MVP Versalles and Tony Oliva's .321 they finally finished first. By the way, this time they finally beat the Yankees, winning 13 of 18, to finish 13-5. It had to happen at some point. It was the first time in forever New York's finest finished the season below .500.