Moose Shows How Important He Was

TRIVIA WINNER: Congrats to Rich Nye of Batavia, IL, who answered Art Mahaffey as the pitcher who was the only Phillies non-position player to hit a home run for the club in 1964. The Prize: Starbucks Gift Card. By the way, yes he is "that" Rich Nye and one of several former major league players to have read this column and responded, and we thank every one of them for the memories they provided for us in the 1960s. Thank you again. And to our loyal readers please feel free to share the column, we do appreciate it.

ANSWER to the Trivia question in the previous column: The 1964 Phillies pitching staff gave up 129 homers and the Phillies non-pitchers hit 129 home runs, but the team hit 130. Art Mahaffey was the lone pitcher to hit a home run for Philadelphia in 1964.

When you think of the 1960 New York Yankees you think of two things; 1) a great power hitting team of Mantle and Maris, 2) the Yankees lost the World Series to Pittsburgh in the most improbable way. There is something we should also think of about that 1960 club; Bill Skowron's enormous impact. He was third behind Mantle and Maris in some categories but led the club in at least two important ones. As the only regular to bat over .300 he led the team in average at .309 and in Doubles with 34. And perhaps his value was never better than on July 19, in Cleveland.

It was a day Moose Skowron would show off how important he was. The Yanks sent Jim Coates to the mound against Jim Perry before 26,000 fans. Perry lasted six innings but was clobbered from start to finish. Skowron got the Yankees started with his 15th homer of the season in the second. It was an opposite field blast to give New York a 1-0 lead. 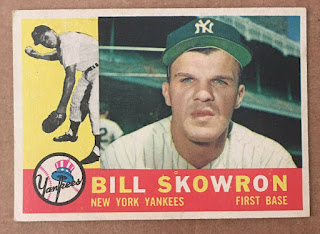 By the time the eighth inning rolled around the Indians and Yankees were locked in a back and forth barrage of home runs including Roger Maris 30th and one by the Indians Jimmy Piersall. Going into the eighth Cleveland led 9-6. In addition to the homer, Skowron had walked and struck out. Leading off the eighth Yogi Berra homered and Skowron followed with his 16th and second of the game to make it 9-8 Cleveland. 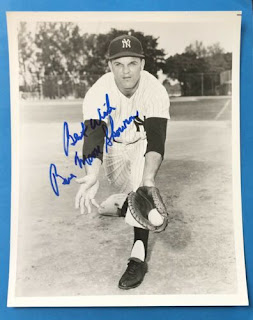 The ninth inning was where it all came together for the big man. A walk, a single and a ground ball error loaded the bases for Berra whose single plated one run and advanced everyone 90 feet. With the bases still loaded Skowron belted a Ted Bowsfield pitch for a double between the fielders in left center to clear the bases. New York now had a one run lead 12-11. Tony Kubek faced reliever Mudcat Grant and promptly singled home Skowron with the insurance run and New York walked away with a 13-11 victory.

Skowron came to the plate five times, went three-for-four with a Walk, scored three, drove in five and smacked a double and two home runs. For the year Moose was third to Mantle in Maris in homers, RBI, Runs scored and just about every other offensive category. And he had a .991 Fielding Average at first base.