TRIVIA WINNER: Congrats to Steven Baily of Glen Cove, NY, who correctly the "first" accomplished by San Diego Padre Rafael Robles after he got on base in the Padres very first MLB game, was a stolen base. The Prize: Starbucks Gift Card.

ANSWER to the Trivia question in the previous column:  The "first" accomplished by San Diego Padre Rafael Robles after he got on base in the Padres very first MLB game, was a stolen base.

If you are lucky enough to be playing baseball on your birthday there is always the chance you will have a great gift to offer rather than receive. Sometimes the pressure will get to you but in the heat of the pennant race of 1966, Bill Mazeroski did not disappoint the Buc faithful on his birthday in Pittsburgh.

The Hall of Fame second baseman would have probably his second best day in his career on September 5, 1966. Of course nothing can top off the Walk Off home run to win Game 7 of the 1960 World Series. The Pirates were playing the Atlanta Braves in a double header this day, leading the NL by 1.5 games over the Dodgers. Manager Harry Walker would send Vern Law to the mound against the Brave's Dick Kelley.

Pittsburgh would jump on Kelley right out of the gate with four runs in the first. Maz got the scoring started with a ground ball to plate Gene Alley and then scored himself on a Jim Pagliaroni double. With Pittsburgh leading 4-3 in the third Kelley was long gone and Clay Carroll was on the hill. Mazeroski led off the inning with a blast over the wall to make it 5-3. 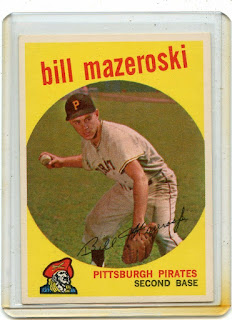 Pittsburgh extended its lead with four in the sixth and three in the seventh. Maz struck out in the fourth but in that sixth inning he was the master. With one out future HOFer Phil Niekro, called on in relief, gave up a single to Alley, and walks to Roberto Clemente and Don Clendenon. Maz strode to the plate with the sacks full. He promptly drilled his 15th homer of the season for a game clinching Grand Slam.

With such a big lead Walker chose to rest his second baseman and others to ready them for the second game. Maz was replaced and in second game, which the Pirates lost, He went 1-4 with a double. On the day he went 3-8, scored four runs, drove in six and hit a pair of homers including a Grand Slam. Happy Birthday Mr. Mazeroski.