ANSWER TO TRIVIA QUESTION IN THE PREVIOUS COLUMN: The Oakland A's pitcher who started the A's first home game in the bay area was Lew Krause. The A's opened at home in game six on April 17th, losing to Baltimore and Dave McNally 4-1. They also lost their Road opener to Baltimore on April 10, 3-1
The fact Brooks Robinson was destined to be a Hall of Famer, is a well known fact. Few doubt he is among the best fielding third basemen ever. He was a clutch hitter and a team leader. Four times in his career he either hit above .300 or flirted with it. Six times he cranked at least 20 homers in a season in an era where 20 was considered an accomplishment. What you may not realize is that he was truly an iron man.
(Brooks and Frank in the 1966 World Series)
From 1961-1968 he played in every single game of the season in four of the eight years. In 1963 he played in 161 of the 162. All five times he either led or tied for the league lead in games played. In two of those years he played in 163 games when the schedule called for 162. That in itself may be a record.
In 1961 he led the AL in at bats with 668 while in 1964 he led the league in RBI with 118. It was  his finest season batting .317 and banging 28 homers. All three were career highs. For his efforts he was voted the American League's Most Valuable Player. The team finished over .500 but fourth in the AL, 18.5 games behind the Yankees. 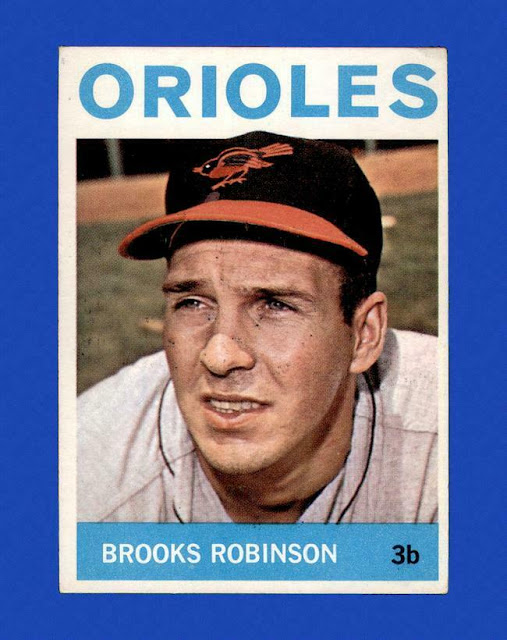 When 1966 rolled around and he was teamed with Frank Robinson under Hank Bauer, there was no stopping the Birds. The first World Series against the Dodgers showed complete dominance over a very strong Dodger club.
For all his cat like reactions on the field he left all of that behind on the base paths. Not built for speed he owns the record he wished he did not; hitting into four triple plays in a career, two in one season. Twice he led the league in double plays grounded into. No one said he could run, but he could field, oh how he could field. The 1970 World Series, won by the Orioles over the Reds was a Robinson clinic on fielding.
If ever there was any doubt he belonged at the top of the fielding charts for third basemen, they were erased in that series.
TRIVIA CONTEST; After reading this column you can enter the weekly trivia contest for a chance to win a Starbucks Gift Card. Enter via the following email. Send 1) your answer to the trivia question at the top of the column, 2) your name, address and email so where we know where to send the card if you win 3) any comment you have on the column. One winner will be selected at random each week based on correct answers with the odds being based on the number of correct entries.  Please cut and paste or enter the following email into your email system.
SEND YOUR ANSWERS TO; brillpro@gmail.com
==========================================================
Need to get out of a baseball hitting slump, or a golf swing slump? Order my new book "Beating the Slump; An athlete's guide to a better career." See it on Amazon for only $5.99. That is for the Paperback, you can also order Kindle on that link. You can also order paperback copies directly from me via the email below for my other books.