TRIVIA WINNER: Congrats to Dave Hubert of Mississauga, Ontario, Canada, who correctly identified Bobby Shantz as the former 24-game winner who was tossed in the deal for Lou Brock with Ernie Broglio. The Prize this week: Starbucks Gift Card.

ANSWER TO TRIVIA QUESTION IN THE PREVIOUS COLUMN: The Cubs sent Lou Brock to the Cardinals for a few players but mainly Ernie Broglio but few remember the Cubbies also got former 24 game winner Bobby Shantz in the deal. Shantz, who won 24 years earlier with Philadelphia never came close again in his career.
The final game the Kansas City Athletics ever played at home showed off what the future would hold for a future Hall of Famer. Jim Catfish Hunter took the mound on September 27, 1967 before a robust crowd of the faithful in Kansas City's Municipal Stadium against the Chicago White Sox. Only 5,325 people showed up to say good-bye to Charlie Finley's A's who would move on to Oakland after wrapping up the season on the road against the Yankees in New York. But this day belonged to the Hunter.
(Jim Catfish Hunter at his Best)
Backed by a line-up of guys who at the time were less than spectacular at the plate, Hunter had to be at his best and he was. With lead off man Ted Kubiak carrying a .149 average to the plate along with John Donaldson, Mike Hershberger, Ramon Webster, Rick Monday, Jim Gosger, Sal Bando and Phil Roof, Hunter knew runs would be scarce. While Monday and Bando would go on to have "careers," the others were like the fifth card in a poker hand when you have four Aces. They were place holders. 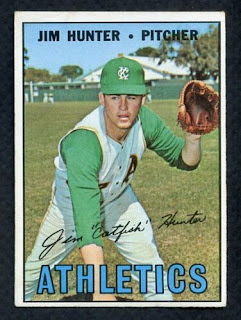 The Catfish didn't allow a hit until the fifth when Ron Hansen singled. Don Buford singled in the 6th and Tommy McCraw doubled in the 7th. Aside from walks to Buford and Ken Berry, that was it for the White Sox. When Tommie Agee, Ken Boyer and McCraw weekly hit the ball into the air for outs in the ninth, it was all over in KC.
Fortunately, the A's bats came into play. And it was Jim Hunter who got it started. Facing a scoreless duel between himself and Sox Ace Joel Horlen, Hunter led off the 6th with a single. Kubiak singled and Donaldson singled home Hunter who was running for all he was worth to score any run. It was 1-0. That would have stood up, but the A's were inspired. 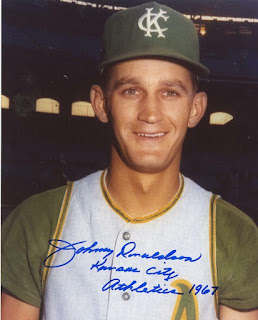 After Hershberger grounded out moving up the runners, Webster singled in two more, 3-0. Knuckle-baller Wilbur Wood replaced Horlen to face Monday. Monday hit a ground ball to second which Buford muffed. Gosger singled but Ken Berry, playing right field this day instead of center, rifled a throw to the plate to cut down Webster to save a run.
Bob Locker replaced Wood and sent a pitch which the catcher could not handle for a passed ball and Monday scored the unearned run to finish the scoring at 4-0. And it all started and ended with Jim Catfish Hunter. Make no mistake about it, the A's finished 62-99, 29.5 games out of first and last in the American League but their last game in KC was one of their best.
Hunter would complete the shut out to go 13-16, striking out two, walking two and allowing only three hits. He would lose the final game of the season for the KC A's, the final game ever for the KC A's, a few days later in New York, 4-3. He finished the season 13-17. He would go on to win 131 more games with the Oakland A's, reeling off four straight 20 win seasons, before signing with the Yankees and winning 23 in his first season there.
Hunter would finish 224-166 with a 3.26 ERA in an even 500 games. His lifetime WHip was 1.13 which is pretty solid. the Hall of Famer died in 1999 at the age of 53 of Lou Gehrig's Disease.
TRIVIA CONTEST; After reading this column you can enter the weekly trivia contest for a chance to win a Starbucks Gift Card. Enter via the following email. Send 1) your answer to the trivia question at the top of the column, 2) your name, address and email so where we know where to send the card if you win 3) any comment you have on the column. One winner will be selected at random each week based on correct answers with the odds being based on the number of correct entries.  Please cut and paste or enter the following email into your email system.
SEND YOUR ANSWERS TO; brillpro@gmail.com
==========================================================
Need to get out of a baseball hitting slump, or a golf swing slump? Order my new book "Beating the Slump; An athlete's guide to a better career." See it on Amazon for only $5.99. That is for the Paperback, you can also order Kindle on that link. You can also order paperback copies directly from me via the email below for my other books.