ANSWER TO TRIVIA QUESTION IN THE PREVIOUS COLUMN: Pete Ward hit 23 home runs in 1964 to lead the Chicago White Sox in long balls.
If ever there was a pitcher whose career was more storied than successful, it was the pitching saga of Johnny Podres. When Podres stepped onto the mound on June 21st, 1969, he reached back for one last time, looking back on 15 years of Major League Baseball. It was not as a member of the historical Boys of Summer; the Brooklyn Dodgers of 1955. It was not as a member of the 1959 and 1963 World Series Los Angeles Dodgers. This time it was as a member of the pitching staff of the new San Diego Padres.
The Padres were brought into existence with the Montreal Expos in the final year of the decade and were loaded with the usual cast offs and young wannabees any expansion team is given. MLB has never been kind to expansion cities. The general feeling was "they got a team, what more do they want?' It was true. 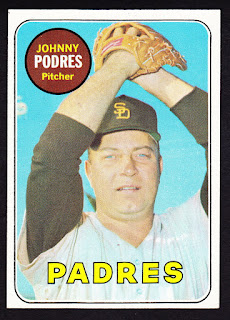 Podres had been released by the Detroit Tigers two seasons earlier, sat out 1968 and for whatever reason was signed by San Diego in March, 1969. Maybe it was his Dodger roots (only a two hour drive from the new Padres playing field), maybe it was the nostalgia of seeing a player on the 1955 Brooklyn championship team, or maybe it was an opportunity to give a young pitching staff the expertise of a guy who'd been there and done that. Podres did go on to become the Padres pitching coach.
For whatever reason, Johnny Podres was going to the mound for one last time in a meaningless game with the Houston Astros. Pretty much every game the Padres played in 1969 was meaningless, and not much more could be said for the Astros. Houston would finish 81-81 and in fifth place in the six team NL West. The Padres would finish last in nearly every category including attendance (512,000) as they only won 52 games. 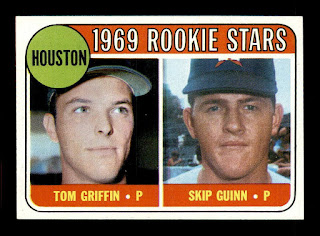 With Houston leading 4-0 manager Preston Gomez called on Podres to pitch the bottom of the eighth inning. He got Johnny Edwards and Curt Blefary easily which brought up opposing pitcher Tom Griffin. Whether he had to reach back on Griffin or whether he just faced down another pitcher, Podres struck out his opposite number and his career came to an end.
The Padres went down 1-2-3 in the ninth and that was that. At age 36 the career of John Joseph Podres was over. It was his 17th game pitched since the club signed him as a free agent exactly three months earlier. He'd started 9 games, completed one, tossed 64 innings while giving up 66 hits. He finished the season with a 4.31 ERA, striking out 17 batters.
It was Griffin's rookie season and striking out was a regular thing, 35 times in 62 AB's, and while Edwards and Blefary would go onto play into the 1970s, both were past their peak.
Hall of Fame Statue of Podres 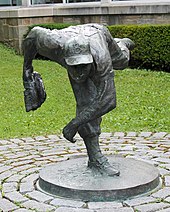 Podres, who was named World Series MVP in 1955 and pitched in both the '59 and '63 Series could look back on some nice accomplishments. He was named Sportsman of the Year by Sports Illustrated and Sport Magazine gave him a Corvette for his 1955 Brooklyn Series. Overall, he would compile a 148-116 record with 1435 K's and a 3.68 ERA with 24 Shutouts. His best season might have been 1961 when he went 18-5 despite not pitching his best. In 1957 he tossed six shutouts and led the league in ERA at 2.66. After retiring from the Padres, Podres would go onto be a pitching coach for 23 seasons. He passed away at 75 in 2008.
TRIVIA CONTEST; After reading this column you can enter the weekly trivia contest for a chance to win a Starbucks Gift Card. Enter via the following email. Send 1) your answer to the trivia question at the top of the column, 2) your name, address and email so where we know where to send the card if you win 3) any comment you have on the column. One winner will be selected at random each week based on correct answers with the odds being based on the number of correct entries.  Please cut and paste or enter the following email into your email system.
SEND YOUR ANSWERS TO; brillpro@gmail.com
==========================================================
Need to get out of a baseball hitting slump, or a golf swing slump? Order my new book "Beating the Slump; An athlete's guide to a better career." See it on Amazon for only $5.99. That is for the Paperback, you can also order Kindle on that link. You can also order paperback copies directly from me via the email below for my other books.