TRIVIA WINNER: Congrats to Tim Nathan of Berkley, MI, who correctly identified Woody Fryman and Don Money as the future All Stars Pittsburgh send to Philadelphia in the Jim Bunning trade. The Prize this week: Starbucks Gift Card.

ANSWER TO TRIVIA QUESTION IN THE PREVIOUS COLUMN: The Pittsburgh Pirates sent future All-Star players Don Money and Woodie Fryman to the Phillies in exchange for 19 game winner Jim Bunning in a trade which did not work out for the Bucs.
After 16 straight losing seasons the Chicago Cubs became an enigma of sorts when they finished the 1963 season over .500. Oh, don't be wowed too much. After finishing with an 82-80 record the Cubs would go on a losing streak again for the next three years before finally turning things around and becoming winners. Still, they finished 1963 as winners but were 7th out of 10 teams in the National League, 17 games out of first place.
The season was an enigma because the man who had for so long led the Cubbies had his worst season. Ernie Banks, now playing first base, finished with only 18 homers and a .227 average, limited to just 130 games. On the other hand, starting pitcher Dick Ellsworth had his best season. Ellsworth went 22-10 with a 2.11 ERA and never again even came close. He never won more than 16 in any other season. 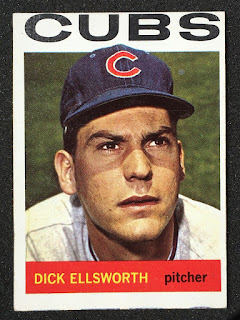 Ace reliever Lindy McDaniel picked up 13 wins and Saved 22 in 56 games (88 innings). After Ellsworth no Cub regular starter finished .500. Larry Jackson at 14-18, and Bob Buhl, 11-14 handled the bulk of the starts. The rest of the starters and bullpen were so-so at best.
The club did shine with the bats of two sluggers. Billy Williams and Ron Santo stood out while Banks slumped. They each belted 25 homers and approached 100 RBI. Santo had 99 while Williams drove in 95. Santo hit .297, Williams clocked .286.
It was the year two other players served the Cubs for such a short time. Ken Hubbs, the second baseman who would be killed in a plane crash in the off season was on the verge of stardom at second base, while Lou Brock was set to break out. The 24 year old Brock would lead the team in stolen bases on his way to the Hall of Fame with 24 and a .258 average. Hubbs hit .235 and would participate in 96 double plays at second base. He was just 21. The 1963 season was his second full year and his last. 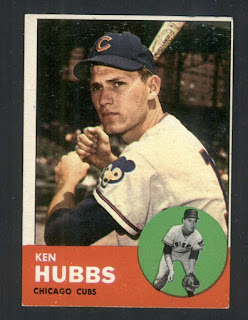 The 1963 season was Brock's last full year in Chicago before being traded to St. Louis after 52 games into 1964 for Ernie Broglio in one of the most famous "bad moves" ever made in baseball history. Batting only .251 when the trade happened, Brock hit .348 the rest of the way for the Cards.
The Cubs did have some of the best "utility" players in the business but it just proved you can't win with just a bunch of guys who are pedestrian at best, but capable of playing multiple positions. Andre Rodgers, Jimmy Stewart and John Boccabella were three guys who would be valuable on any club. Having all three was not an advantage for the Cubbies or manager Bob Kennedy.
However, they never lost more than six straight but never won more than six straight and never, ever led the NL during the season. The sad thing is even the lovable Cubs failed to draw a million fans, with just over 979,000. It was the year after the rotating manager situation and Kennedy got the full time gig. As for GM John Holland who traded Brock - he stuck around for a number of  years after that. Cubs fans never forgave him.
TRIVIA CONTEST; After reading this column you can enter the weekly trivia contest for a chance to win a Starbucks Gift Card. Enter via the following email. Send 1) your answer to the trivia question at the top of the column, 2) your name, address and email so where we know where to send the card if you win 3) any comment you have on the column. One winner will be selected at random each week based on correct answers with the odds being based on the number of correct entries.  Please cut and paste or enter the following email into your email system.
SEND YOUR ANSWERS TO; brillpro@gmail.com
==========================================================
Need to get out of a baseball hitting slump, or a golf swing slump? Order my new book "Beating the Slump; An athlete's guide to a better career." See it on Amazon for only $5.99. That is for the Paperback, you can also order Kindle on that link. You can also order paperback copies directly from me via the email below for my other books.

Thank you to those of you who purchased my book after reading this column.
Posted by Baseball in the 1960s at 10:58 PM