TRIVIA WINNER: Congrats to Nils Westholm, of Springfield, IL, who correctly identified Buzzie Bavasi as the General Manager of the San Diego Padres in 1969 when the team came into existence. The Prize this week: Starbucks Gift Card.

ANSWER TO TRIVIA QUESTION IN THE PREVIOUS COLUMN: Buzzie Bavasi was the GM of the new San Diego Padres in 1969 and his son Peter was the Scouting Director on a team loaded with former Dodger players and execs.

Few pitchers in baseball history can make the claims Jim Bunning could. The future US Senator from Kentucky and baseball Hall of Famer was one of the most dominant pitchers of the 1960s. He never 20 twenty games during the decade; he did that in 1957 (20-8). He did however have four years out of five where he came as close as a pitcher can ever come; four times in five years he won 19 games. The saddest mark coming in the final stretch of 1964 (see final paragraph below).
(Jim Bunning's Perfect Game Final Out - K)
Bunning was an amazing pillar of consistency. From 1960-69 he only failed to win in double figures once which turned out to be the worst season of his career. It was the year the Pirates, looking to bolster a sagging starting staff to back it's Lumber Company powerhouse, acquired Bunning for four players. Bunning left them cold with injuries and was 4-14 in his only full year in Pittsburgh. The Bucs shipped him off to the Dodgers in mid-1969 where he ended with a 13-10 record.
In the 1960's he averaged 259 innings a season, 15 wins, with an ERA mostly in the 2.60 range and strong WHIP. In 1962 he was 19-10 with the Tigers. Two  years later the Phillies acquired Bunning and from 1964-1966 he was one of the top right-handers in the big leagues. In those three years he was 57-31 and his WHIP was an amazing 1.03 (approximate), winning 19 games each season. 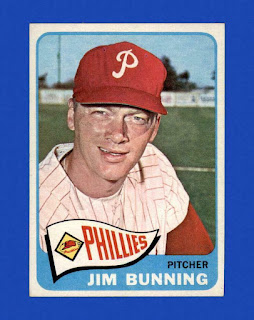 Bunning struck out 739 batters and walked only 163, in 889 innings. He was an intimidator, leading the league four times in Hit Batsman. He plunked 45 in those three years. It wasn't as if Bunning was wild. He was calculated, pitching inside. He had amazing control while at the same time leading the league in hitting batters was pretty much "I own the plate, don't even try it." The fact he is 13th All Time in hitting batters while striking out nearly three times as many batters as he walked, showed how hitters respected Bunning, or were forced to.
Known for throwing no-hitters in each league, Bunning was dominant pretty much through all of his career. The seven time all-star spent 17 seasons in the big leagues. He finished with 224 wins and 184 losses. A total of 51 of those losses came in his final four seasons as he was playing out the string and hanging on. He still managed to 32 games during that stretch. So if you were to discount those final four years he'd have finished 192-133, or 59 wins over the .500 mark. 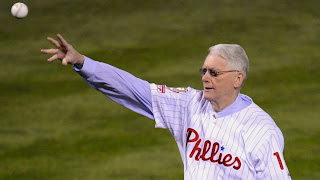 (REUTERS/Ray Stubblebine)
Did we forget to mention he was an outstanding fielding pitcher who four times led his league in fielding his position? In a key modern day statistic, eight times he finished in the top 10 at his position in WAR (Wins Above Replacement) and is 196th overall in the category. On top of that he served six terms in the United States Congress and Two terms in the US Senate. Bunning, who died in 2017, is the only member of the Baseball Hall of Fame to serve in the Senate.
Unfortunately, he never got a taste of the post season. The year he came closest was the 1964 Phillies collapse. In that stretch, Bunning won no. 18 but the Phils dropped the next 10 games (three losses going to Bunning) before Bunning won his 19th on the final day of the season and the Cardinals captured the NL title.
TRIVIA CONTEST; After reading this column you can enter the weekly trivia contest for a chance to win a Starbucks Gift Card. Enter via the following email. Send 1) your answer to the trivia question at the top of the column, 2) your name, address and email so where we know where to send the card if you win 3) any comment you have on the column. One winner will be selected at random each week based on correct answers with the odds being based on the number of correct entries.  Please cut and paste or enter the following email into your email system.
SEND YOUR ANSWERS TO; brillpro@gmail.com
==========================================================
Need to get out of a baseball hitting slump, or a golf swing slump? Order my new book "Beating the Slump; An athlete's guide to a better career." See it on Amazon for only $5.99. That is for the Paperback, you can also order Kindle on that link. You can also order paperback copies directly from me via the email below for my other books.