TRIVIA WINNER: Congrats to  Mark Hutchinson of Greendale, WI, who correctly answered the trivia question about who Joe Nuxhall played for, aside from the Cincinnati Reds in his career. He played for the Angels and the Kansas City A's. This week a new Trivia Contest. The Prize this week again is a Starbucks Gift Card.

ANSWER TO TRIVIA QUESTION IN THE PREVIOUS COLUMN: In his 16 year career in the big leagues, aside from the Reds, Joe Nuxhall played for the Angels and the A's of Kansas City.

It's not often a journeyman player makes a huge impact, but such is the case of shortstop Andre Rodgers. Rogers was born, raised and died in the Bahamas. Nassau was home and his final resting place. As the first Bahamian player to go to the big leagues he had to overcome being a great Cricket player. He did.

His acceptance into the majors started kids playing baseball in the Bahamas and it paved the way for players such as Ed Armbrister among others to go north. Baseball became more popular than Cricket because of Rodgers. Rodgers big league career began in 1957 when he played in New York with the Giants and traveled with them to San Francisco. 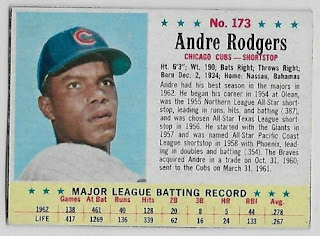 By 1961 he'd played out his time with the Giants and the Cubs needed a shortstop with Ernie Banks moving to first. However, not before Rodgers made a non-playing stop in Milwaukee. On Halloween, 1960 the Giants sent him to Milwaukee for Alvin Dark (who ended up as the Giants manager), but before the season started in 1961, he was shipped to the Cubs in a four player deal which brought Moe Drabowsky to the Braves.

Rodgers best had been .250 in a part time role. In 1962 he became the Cubbies starter at Short and immediately performed. He had his best season at the plate, hitting .278 in over 400 at bats. In 138 games he also hit eight triples.

The following season he fell off drastically with more playing time, hitting .229 in 150 games but also teamed with Ken Hubbs at second to set the league doubleplay record for the time. He rebounded a bit in 1964 raising his average to .239, cranking out 12 home runs which doubled his previous high. It would be his high water mark. 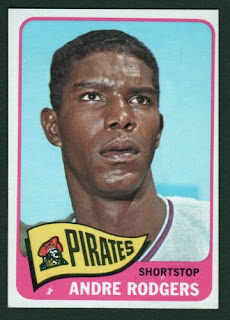 With Don Kessinger waiting in the wings and ready for prime time, the Cubs dealt their 30 year old shortstop to Pittsburgh for Roberto Pena. The Bucs would need to shore up the infield due to an injury to Bill Mazeroski. Gene Alley was blossoming at short but played second in Maz's absence, opening the door for Rodgers to fill in at his natural position. Bob Baily was locked in at third when he wasn't playing the outfield. Rodgers played one game at second, and ended up filling in around the horn.


Use PayPal to brillpro@prodigy.net or contact us at the same email for other payment.