TRIVIA WINNER: Congrats to Mark Hutchinson of Greendale, WI, who correctly answered the trivia question and then was selected in a random drawing. He correctly answered that Mario Mendoza (known for the Mendoza Line) smacked a total of 4 home runs in his career. This week is a new week and a new Trivia Contest. The Prize this week again is a Starbucks Gift Card.

ANSWER TO TRIVIA QUESTION IN THE PREVIOUS COLUMN: Mario Mendoza's lifetime BA was only .215,  and his lifetime home run total was FOUR.

When the decade of the 1960s ended so did a key cog in baseball's darkest hour. In 1969 Eddie Cicotte passed away at the age of 84 in Detroit. He was probably the most important of the players charged with throwing the 1919 World Series as the White Sox were then labeled the Black Sox. Cicotte won 29 games that season and his story is well documented. But there is more to the story most people miss. 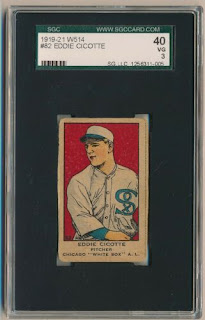 Gamblers approached players Chick Gandil and Swede Risberg who agreed to reach out to several other players. Gamblers, headed by Arnold Rothstein arranged to pay eight players to fix the series so the gamblers could bet heavily on the under dog Cicinnati Reds.

Eventually there was a trial, the players were acquitted but newly named Commissioner Kenesaw Mountain Landis banned them from baseball. The controversy continues to this day. What most people don't know is that 10 players were actually banned, not eight. And all but one of the eight Black Sox played for the White Sox in the 1920 season, they all got raises from the previous year and nearly all had great if not better seasons, plus the club won more games in 1920.

The other two players who were banned, who are rarely if ever talked about were Hal Chase, a long time player who was also a well known "fixer" of games and associate of gamblers. Playing for the New York Giants, helped put the gamblers and the players together and was banned for life. Joe Gedeon was a player with the St. Louis Browns and an acquaintance of Sox shortstop, Risberg. Risberg tipped him off before the Series an Gedeon bet heavily on the Reds. Landis banned both Gedeon and Chase for life with the eight Black Sox. 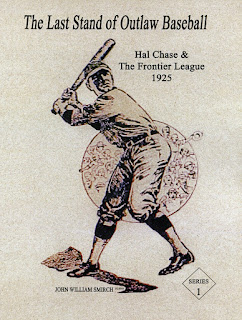 Rumors spread during the 1919 World Series that a "fix" was in and Cicotte and pitcher Lefty Williams who won 23 games were the keys. The gamblers also wanted Shoeless Joe Jackson. Jackson was reluctant and even went to owner Charlie Comiskey to ask to be taken out of the line up before the series started so his name could not be associated with the fix. Comiskey refused even when Jackson told him of what "might" be happening. There were event reports Jackson tried to give the money to Comiskey. Jackson had a great series, hitting the only homer. 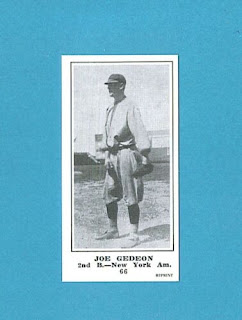 Comiskey put it in Cicotte's contract that if he won 30 games he'd get an extra Ten-thousand dollar bonus. With a week left Cicotte had 29 wins. Comiskey told manager Kid Gleason to rest Cicotte for the Series. In his final game Cicotte was taken out in the third inning with a lead. It assured the team Cicotte would finish with 29 wins, not 30. When Eddie went to the owner to try to get the money, he was told "no." It angered Cicotte and made him the perfect dupe for the gamblers.

Cicotte was ordered to hit the first batter he faced in Game One if the "fix" was on. He did, hitting Reds second baseman, Morrie Rath. He was later remorseful and tried to win but the plans were laid out too well. Gamblers threatened the lives of Williams' family and when the final game was on the line, Lefty Williams made sure the Reds were going to win.

The year 1920 was one of the most important years in American history. Women got the right to vote, Prohibition was in full swing, terrorists attacked Wall Street killing 38 and injuring 200 more in what at the time was the worst act of terrorism on US soil. The New York Yankees were playing the White Sox in Chicago that day. Imagine the reporters upon getting the news on the AP Wire, running down to interview the Yankees. Something else happened that year; Babe Ruth saved the national past time, belting 54 home runs. No one had ever come close. One reason was the owners decided a new ball was to be put in play more regularly, so a "live" ball was now in play nearly all the time. It was also the year Ray Chapman was beaned and killed during a game and it was the first time ever games were played in the newly formed Negro League. Few people were paying as much attention to the Black Sox until near the end of the season.

In 1920, Gandil wanted a $10-thousand dollar raise. Comiskey said no and Chick retired to California. It is believed he took the bulk of the money with him. He would come back later for the trial in 1921. The other seven players got raises including Happy Felsch whose salary about doubled for the year. Suspicion was cast upon Comisky who many wondered why he would give raises to players who cheated? Was it to throw suspicion off himself not for the fix, but for being a cheapskate owner?

The 1920 season was coming to a close but with three games left in the season and the Sox trailing the AL leading Indians by only a couple of games, they had a shot to return to the Series. AL President Ban Johnson had told a reporter he was totally against the Sox going back. Most speculated the scandal would come up again if they did.

Then the unthinkable happened. One of the gamblers told a newspaper reporter his version of the fix and three days before the end of the season the story broke. Cicotte decided it was time to fess up and he went to Comiskey's lawyer and turned himself in, telling the whole story eventually to the Grand Jury. It is believed while he mentioned Jackson and Buck Weaver, he did not implicate them directly as taking money and throwing games.

Comiskey had no choice but to suspend the seven players with three games remaining and the Sox were done. On September 27, 1920 the seven played their last game in the big leagues. A year later they were acquitted in a trial of any wrongdoing, but it was well known most of them were guilty. Commissioner Landis made his decision and they were banned for life. Below are their stats from 1919-1920.

If you were to ask most historians about the series today, it's pretty much assured they don't think Weaver and Jackson did anything to throw the series. Gandil, Risberg, Felsch and Williams were as guilty as they come. Cicotte was too but had an epiphany during the series and tried to correct his errors. He even spent an entire sleepless night throwing up over his involvement during the series. McMullen didn't have much of a chance although it is believed he was definitely in on it. As for Chase, he should have been banned long before that and Gedeon probably deserved less punishment but Landis was harsh.