SPECIAL NOTE: You may see a Trivia Video at the top of the column occasionally. It is my YouTube Channel Daily Trivia Contest which I invite you to view and even subscribe and Like. The regular column is still here and will continue to be. The Mobile Version is a little different but the column is there as well. Thanx!

TRIVIA WINNER: Congrats to Tim Nathan of Berkley, MI, who correctly answered the trivia question about who the Yankees got in trade for Clete Boyer. It was Chi-Chi Olivo and Bill Robinson. He was then was selected in a random drawing. This week is a new week and a new Trivia Contest. The Prize this week again is a Starbucks Gift Card.

ANSWER TO TRIVIA QUESTION IN THE PREVIOUS COLUMN: In the trade which sent Clete Boyer to Atlanta the Yankees got two players in return;  Chi-Chi Olivo and Bill Robinson.

The Cincinnati Reds in the 1960s were known as good hitters and decent pitchers but in the 1964 season when they almost won the pennant it was pitching which carried them.  While Frank Robinson led the club with 29 homers, he was the only regular over .300 with a .306 BA. Vada Pinson had 23 and Deron Johnson 21, but the team only batted .249, scoring 660 runs and finishing in the middle to bottom of the pack in almost every statistical category. That is except two; pitching and speed. They were second in stolen bases with 90, and on the mound they were first in fewest runs allowed and second in ERA with an amazing 3.07. Even more amazing was the WHIP, which we barely noticed back then. The walks and hits per inning pitched was a major 1.17!

It was a team Fred Hutchinson helped build and it was the last team the beloved manager would call his. Hutchinson had been diagnosed with cancer before the season started. The players knew it was probably his last hurrah. 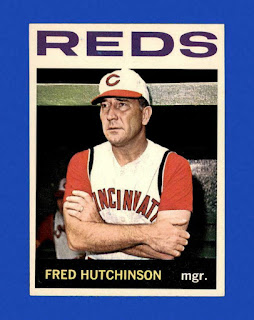 While Tommy Harper with 24 and Robinson with 23 led the team in steals, the rest were spread around. They had team speed with Pinson who scored 99 runs, Pete Rose and super utility guy Chico Ruiz. Rose in his second NL season batted only .269.

However, it was the bullpen which made this team shine. Future starter Sammy Ellis tossed 122 innings and only started five of his 52 games. He went 10-3 with a 2.57 ERA. Toss in Billy McCool 2.42 and Ryne Duren 2.89 and you would have had a formidable pen leaving it at that. That does not account for the one wild card. In 36 games Bill Henry only tossed 52 innings but what innings they were. He only allowed 31 hits and finished with a 0.87 ERA and 0.82 WHIP! 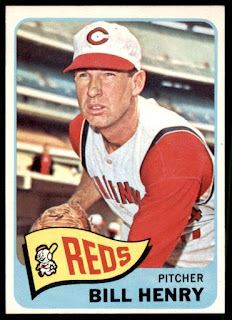 The club was 60-49 when Dick Sisler took over for Fred Hutchinson and took the Reds down the stretch with a 32-21 record. They would finish just one game behind the Cardinals in the year of the Phillies collapse.  Sisler took over when Hutchinson was forced to step down due to a battle with cancer. The beloved Hutch would pass away in November of the same year.

From September 16-27 the Reds were on fire while the Phillies were collapsing. Cincinnati won 12 of 13, capped off by a double header win over the Mets. With five games left they controlled their own destiny, and were in first place by a game.

Then it happened. The Pirates Bob Friend beat them 2-0 on an 11-hit shutout with Bucs second sacker Bill Mazeroski driving in both runs. They were still tied for first. The following day it was a 16-inning affair with Pittsburgh with Donn Clendenon doubling followed by a single by Jerry May to drive in the games only run 1-0. Maloney and Bob Veale battled it out into the 12th inning before giving way to relievers.

The loss left them a game back with three left.   It was a 5-4 Reds win the next day but Cincinnati could not pull off anything in the final two, losing a pair to the Phillies who needed the wins. It was 4-3 and then a 10-0 embarrassing loss to Jim Bunning in the final game. It was over. The team was hoping to win it for Hutch but it wasn't to be. The Cardinals would take it and go on to beat the Yankees in the World Series.