TRIVIA WINNER: Congrats to Rich Klein of Grand Prairie, TX, who correctly answered the trivia question about record breaking double play combo's in the 1960s. He correctly stated it was Bill Mazeroski and Gene Alley who broke the record set for DP's three years earlier by Ken Hubbs and Andre Rodgers. This week a new Trivia Contest. The Prize this week again is a Starbucks Gift Card.

ANSWER TO TRIVIA QUESTION IN THE PREVIOUS COLUMN: In 1966 Bill Mazeroski and Gene Alley broke the record set for DP's three years earlier by Ken Hubbs and Andre Rodgers. Rodgers was involved in 100 in 1963, and Alley was involved in 128. In 1965 they became teammates in Pittsburgh, which is appropriate for this week's column.

In 1965 the Pittsburgh Pirates were at a crossroads. It was a club in transition. It had a solid core but an aging core. Several key players were on the cusp while several more were in their prime and a few longtime Buc stalwarts were over the hill or ready to move on and out. On December 1, 1965, the Pirates made one of the best trades in their history  They acquired outfielder Matty Alou from the Giants for reliever Joe Gibbon and catcher Ossie Virgil.

Alou was the middle brother of the major league playing Alou's. Felipe, the slugger was the oldest, Jesus the potential star was the youngest and in the middle was the fastest of the trio, Mateo. All three were good defensively and it goes without saying Felipe was the guy no one wanted to give up. The Giants had a crowded outfield and needed a left-handed arm in the bullpen. 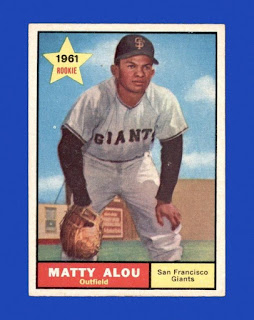 The Pirates needed to replace the aging Bill Virdon in center-field with a swift outfielder who could cover lots of ground in spacious Forbes Field. They needed someone too who could back up Willie Stargell and Bob Bailey in left. Roberto Clemente was a fixture in right so having a center-fielder who could really go get it was essential. The problem was, while earlier in his career Matty showed some signs of a consistently good average, he'd only hit .231 in 1964 and .264 the year before that. Virdon was hitting higher for an average but still was not the lead off man the Bucs always sought.

Pittsburgh needed a guy who could get on base ahead of Clemente, Stargell, Donn Clendenon and Bailey. Could the 5'9" 160 pound Alou be that guy? New manager Harry "the Hat" Walker thought so. Walker was a solid hitter in his day and even won a batting title, but more importantly he knew how to teach hitting. He figured by using the extra hard infield in front of home plate at Forbes Field, Alou should be able to bounce his way to at least .290. With some bunt singles and his speed from the left side of the plate, there could easily be another 15 or 20 hits in the season. 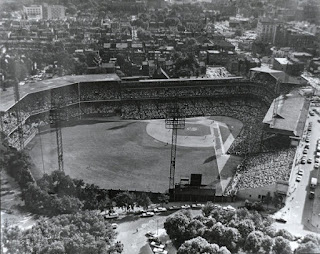 (Spacious Forbes Field)
No one ever dreamed what Alou really did accomplish. In the first three games little Matty had five hits in 15 at bats. By the time the end of the season rolled around he would hit .342, 111 points above his previous season's average and would take the National League batting title. He was the driving force behind a pirates club which dominated the NL hitting stats. Walker was right. By bouncing the ball off the hard turf and spraying the ball around using an oversized bat, Alou became a master hitter.

Gene Alley and Clendenon both hit .299 (Clendenon also banged 28 homers), Clemente won the MVP with a .317 average and 29 homers, Stargell hit at a .315 clip and led the team in home runs with 33, Bill Mazeroski had one of his best hitting seasons at .262 but added 16 dingers and Bailey and Jose Pagan combined for 17 home runs and an even 100 RBI. The team batting average was an amazing .279 with 158 home runs in 1966. If the pitching had not faltered so badly, they would have had more than their 92 wins and a third place finish behind the Dodgers and Giants.

Alou would go on to hit ,338, .332, .331 and .297 in the following four years. He missed out on his second batting title when he ended in a virtual tie with Pete Rose at .332 and lost by a the fourth number to the right of the decimal point. One more bunt single and he'd have had a second NL batting crown. After batting .297 he was traded to St. Louis where he had three more seasons above .300. However, his defensive skills were fading and he eventually played with several teams including the Yankees, A's and Padres before finishing his 15 year career in 1974. Based on his work with Harry Walker and his years in Pittsburgh, Alou concluded with a .280 lifetime average and he got to the World Series twice. In the 1972 ALCS he batted .381 for Oakland. 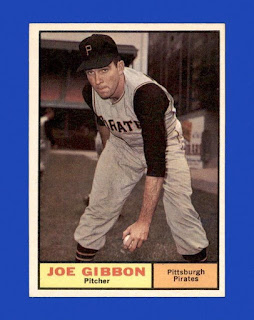 Gibbon had a couple of good seasons with the Giants before coming back to Pittsburgh in 1969 and having perhaps his best year, recording a 1.93 ERA in 51 innings. Virgil hit .213 for the Giants in 1966 and was out of baseball. He did come back in 1969 for one game with San Francisco. Virdon, the NL Rookie of the Year in 1955, was released by the Pirates before the 1966 season despite hitting .279, and retired. He did come back for a few games with the Pirates in 1968 but went onto a good managing career with the Yankees, Pittsburgh and Houston before calling it a career.

In the end when it came to career batting average, Matty bested his brothers, finishing at .307 to .280 for Jesus, although Felipe finished with 206 home runs and a near .290 average.