TRIVIA WINNER: Congrats to John Rollins of Jasper, Alabama, who correctly answered the trivia question and then was selected in a random drawing. He correctly answered that Bill White was the third 1964 St. Louis Cardinal to bat .300 or better behind Lou Brock and Curt Flood. White hit .303 with 21 homers and 102 RBI. This week is a new week and a new Trivia Contest. The Prize this week again is a Starbucks Gift Card.

ANSWER TO TRIVIA QUESTION IN THE PREVIOUS COLUMN: There were three regulars who batted .300 or better during the 1964 Cardinals season. Lou Brock, Curt Flood and Bill White was the third batting .303.


When you read the title "Unheard of NY Yankee Season" I'm sure you thought of some of those great Yankee teams of the past. It wasn't my intention to disappoint you but the unusual fact is during the 1966 season, the New York Yankees did not even spend ONE DAY in first place. It was a time of hard transition for the former Bronx Bombers.
(The highlight of the "1967" Season)
They lost Opening Day 2-1 before 40,000 plus as the Tigers Mickey Lolich outdueled the aging Whitey Ford. They never looked up again, losing nine of the next 10 games and when the dust had settled on the 1966 season, the Mighty Yankees were in last place. They were 26.5 games behind the World Champion Baltimore Orioles at 70-89.

It was a strange year to be sure. Johnny Keane piloted the club for the first 20 games and lost 16 of them before Ralph Houk was brought back to manage the club. Houk's club never recovered going 66-73. They were shutout 13 times, while shutting out opponents in seven games. 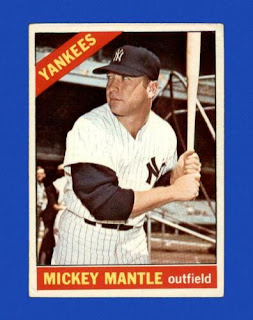 While Joe Pepitone led the club in homers with 31, an injury plagued Mickey Mantle still held sway. At 34 he led the club in batting .288 with 23 homers in just 108 games with 333 AB. It was  his lowest AB total and his worst season since his rookie year of 1951. He would rebound in 1967 to play a full season and be the Mick once again, but 1966 was a disaster for the switch-hitter and everyone who followed New York. No one else on the club bettered .266.

On the mound it was a young pitching staff in transition. Ford was at the end of his career and while he would pitch again in 1967, he was through. In '66, despite being the opening day starter, he was used mainly in relief and while he had a respectable ERA (2.47) he would finish 2-5 in only 73 innings. In the opener he looked like the old Ford going 8.2 innings, allowing two runs on six hits and a walk. Three of those singles came in the ninth as the Tigers scored the winning run. 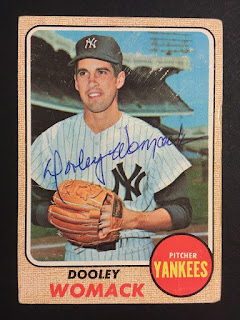 Reliever Dooley Womack burst on the scene  as a rookie with a 7-3 record in 75 innings and four Saves. Pedro Ramos took the lead in Saves with 13 but Womack moved to the forefront in 1967. There were other highlights. Stan Bahnsen arrived at age 21, Roger Repoz looked solid batting .349 in 37 games. Horace Clarke and Roy White came into their own as well as a kid named Bobby Murcer who would eventually take over for Mantle in center-field.

Murcer had to take two seasons off for the military during the Viet Nam era and other players took their turns doing weekend duty with the National Guard. It was a common occurrence in the mid-1960's with the war in southeast Asia raging.

The end was near though for those familiar names in 1966. Clete Boyer would end up in Atlanta, Roger Maris would move on to St. Louis, Elston Howard would finish his career with the hated Red Sox and Bobby Richardson would call it a career.

Some of the other older players who made the season one to forget in New York who were on the roster that year were Bob Friend, Dick Schofield, Hector Lopez, Billy Bryan and Ruben Amaro. The following season, New York moved up to 9th place but the club was ready to improve with some really good players making strides. The mid 1960's were not what Yankee fans wanted to see, but the players were still fan fav's.

Thank you to those of you who purchased my book after reading this column.
Posted by Baseball in the 1960s at 11:07 PM