The World Series Which Should Have Been

TRIVIA QUESTION: While the Yankees had the most World Series appearances in the 1960's with five, which teams had the second most (hint; there were two of them)?

ANSWER TO TRIVIA QUESTION IN THE PREVIOUS COLUMN:  There were two teams which had the "least" number of wins and were still favored going into the World Series in the 1960s; both American League clubs. The 1960 New York Yankees entered the series heavy favorites with 97 wins in a 154 game season. The 1966 Orioles also had 97 wins but in a 162 game season. The Yankees lost to Pittsburgh, the O's swept the Dodgers.

As the World Series wraps for 2019, one can only wonder what the 1967 World Series would have been if not for one pitch. A pitch which hit Boston Red Sox slugger Tony Conigliaro in the face. It did not bring Tony C.'s career to a complete end, but it ended the dreams which could have been, not only for the player but for the Boston Faithful.

Conigliaro was having a fantastic year on a fantastic club, batting behind the ultimate player in Carl Yastrzemski. Yaz would go on to win the Triple Crown batting in front of Conigliaro. Conigliaro was on the rise, he had slugged 20 homers in just 95 games while driving in 67, and batting .287.

Then on August 18th, the Red Sox were facing the Angels and Jack Hamilton. Conigliaro was hit by a pitch on his left cheekbone and was carried off the field on a stretcher. He sustained a linear fracture of the left cheekbone and a dislocated jaw with severe damage to his left retina. The batting helmet he was wearing did not have the protective ear-flap which has since become standard. 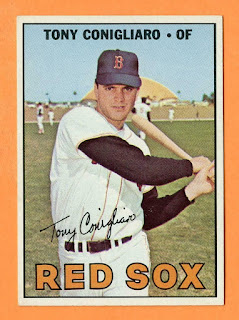 The Sox were 10 games over .500 at the time after winning the game 3-2. Perhaps spurred on by the loss of their young slugger, the club went on a winning streak. They went on to win six in a row and 12 of the next 15 games. They led by 1.5 games and played outstanding baseball the rest of the season. So did the Minnesota Twins who faced the Sox on the final day of the season needing a win. Boston, behind Cy Young Winner Jim Lonborg beat the Twins and 20-game winner Dean Chance 5-3 to clinch the pennant. 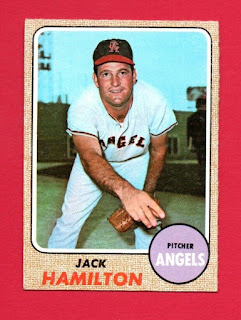 They would face the powerful Cardinals in the World Series.  With Tony C., out, manager Dick Williams was forced to play Hawk Harrelson and Jose Tartabull in right field. In four games Harrelson had one hit in 13 at bats driving in one run and batting .077. Tartabull had only two hits in 13 at bats, scored one run and batted .154. They combined to go 0-fror-5 in Game 7. Certainly one would assume Conigilaro would have done somewhat, if not much better. Red Sox dreams would have to wait for nearly 40 more years.

Conigiliaro would not live to see a Red Sox championship. He died in 1990 at the age of 45. After sitting out the 1968 season he came back in 1969 and 1970 with two really solid seasons. He was named Comeback Player of the Year for his efforts in 1969 smacking 20 home runs and followed it up with 36. A year later with the Angels and back to Boston for the final season, he retired in 1975 at the age of 30.

Hamilton was traded to the Indians after the season and then to the White Sox, and retired after the 1969 season, also at the age of 30. He died in 2018. Neither one of them ever played in the post season.