TRIVIA QUESTION: Who was the only Mets pitcher to hit a home run during the regular season in 1969?

ANSWER TO TRIVIA QUESTION IN THE PREVIOUS COLUMN:  There have only been three tie games in the World Series in the modern era (starting in 1903) and the New York Giants played in two of them. In 1907 the Cubs and Tigers played a tie game in a series won by Chicago 4-0-1. In 1912 the Red Sox beat the Giants in eight games including the tie while in 1922 the Giants were victorious over the Yankees in five games 4-0-1.

The thing which made the 1969 World Series so interesting, aside from the fact the METS had finally won something, were the players who were key in the clutch. While the Mets played through the regular season with mostly home grown talent, in the World Series it was a handful of cast offs who made the difference.

The regular season Mets won 100 games with mostly players brought up through the system. They may not have been spectacular players but they led the way. Jerry Grote was acquired from Houston and kept the pitching staff in stride all season long from behind the plate. Tommy Agee was picked up from the White Sox (who got him from Cleveland) and he led the club in homers with 26 and batted .271.

Of the 109 homers the club hit, 69 were by guys the team acquired via trade or waivers. Agee led the team in RBI with 76 and as a whole the team batted a lowly .242, good for seventh in the National League. Art Shamsky did hit .300 in a limited role, playing in 100 games. 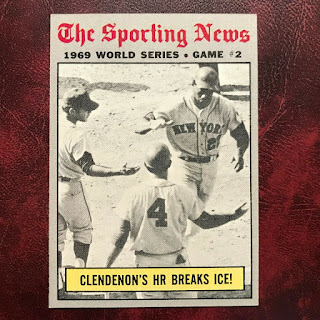 When it came to the World Series some of the keys were Donn Clendenon (acquired from Montreal after being left unprotected in the expansion draft by Pittsburgh), Ed Charles the former KC A's third baseman, Al Weis who was an all around utility player with the White Sox, Shamsky who once hit four consecutive home runs with the Reds, J.C. Martin of the White Sox and Don Cardwell who pitched for several teams before joining the Mets.

Of those cast offs who led the Mets to the Series win over the Baltimore Orioles, there is no doubt Weis and Clendenon were the biggest contributors. Weis, a career .219 hitter, stroked .455 with a homer and three RBI on five hits. Clendenon, who once hit 28 homers in Pittsburgh, had five hits while batting .357. But what hits he had, including a double and three home runs while driving in four and scoring four. 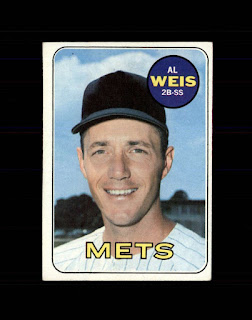 It was Weis and Clendenon who personally beat the O's in Game Two as the Mets edged Baltimore 2-1. Clendenon had a solo homer and Weis drove in the winning run with a single to back the pitching of Jerry Koosman. Clendenon's two run blast and a solo shot by Weis provided the difference in the Mets Game Five Series clincher, 5-3.

While it was a total team effort (who can forget Ron Swoboda's diving catch) with the Mets pitching being superb, there is no denying Donn and Al were to become folklore heroes. Clendenon would close out his career in 1972 with the Cardinals. He hit 159 homers and had a .274 BA lifetime. His biggest problem was his strikeout ratio. Five times he struck out over 100 times (this was huge in the 1960s), twice leading the league.

Weis retired after the 1971 season. His lifetime .219 batting average coupled with only seven homers during the regular season over a 10 year career, wasn't much to write home about. He came to the Mets in the Tommy Agee trade.

Please share this blog with your friends and colleagues and leave a comment at the bottom of the blog if you have one. Thank YOU VERY MUCH!! Please pick up a copy of my book "Tales of My Baseball Youth; A Child of the 60's" at www.bobbrillbooks.com, or on Amazon.
Posted by Baseball in the 1960s at 11:04 PM