TRIVIA QUESTION: While Bobby Richardson was known for batting lead-off for the Yankees, he did NOT bat lead-off in every game of the 1960 Series. How many times did he bat first in the 1960 Series?

ANSWER TO TRIVIA QUESTION IN THE PREVIOUS COLUMN: In the 1968 All-Star Game, Harmon Killebrew's career almost came to an end when a throw from shortstop to first caused the hulking first sacker to do a split. The injury limited him the rest of the year. The throw came from all-star shortstop, Jim Fregosi.

He might be overlooked today but during the 12 seasons Bobby Richardson anchored second base for the New York Yankees, he was a town favorite. Overlooked perhaps because of Mantle, Maris, Berra and even Pepitone, the sterling defensive whiz had some solid years at the plate and even garnered fame with an award no one else of his stature ever got.

Richardson's career .266 BA belied his value and even his bat. Twice he hit .300 or better which for a lead off man who drew few walks, such an average was extremely important. Most years however he hovered around the .260 mark. He only smacked 34 homers in his career, but he did lead the league in hits with 209 in 1962. He also had 692 AB, one of three times he led the league in the category.

Of course with the team around him scoring so many runs so often, he had far more opportunities than most. However, it was in the post season where he excelled and especially in the strange 1960 Series against Pittsburgh. 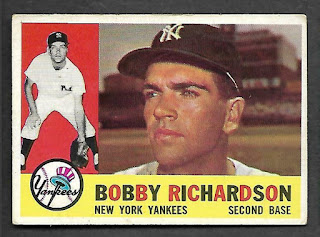 The second baseman most noted for the series is Bill Mazeroski, whose walk off homer in Game 7 capped a wild set and sent the Yankees down to defeat. Maz could have easily been named MVP. He hit two key home runs in the seven games and played flawlessly at second. Richardson WAS named MVP.

Richardson was the only member of a World Series losing team to be named Most Valuable Player. He clubbed 11 hits and drove in a Series record 12 runs in the seven games. He also had 2 doubles, 2 triples and a home run while batting .367. Again it was the team around him giving him the opportunities because they scored 55 runs. Still, it was Richardson who drove in 12 of them and scored 8 in 30 AB's. 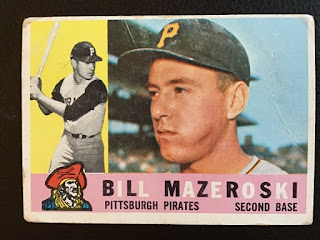 The following year in the Yankees Series win against the Reds, he had 9 hits in the five game series and batted .391. In the 1964 Series which New York lost to St. Louis, he batted .401 with 13 hits in 32 AB. The Series went seven games.

There would be no more post seasons for Richardson as New York began to slide. He'd retire after the 1966 season. Three times he led the AL in singles, twice in sacrifice bunts and three times striking out the fewest times per at bats. While Richardson never led the AL in fielding he often led in other defensive categories including four times being involved in double plays.

Please share this blog with your friends and colleagues and leave a comment at the bottom of the blog if you have one. Thank YOU VERY MUCH!! Please pick up a copy of my book "Tales of My Baseball Youth; A Child of the 60's" at www.bobbrillbooks.com, or on Amazon.
Posted by Baseball in the 1960s at 11:39 PM