ANSWER TO TRIVIA QUESTION IN THE PREVIOUS COLUMN:  Despite leading the NL or the AL in strikeouts in five different seasons, slugger Dick Stuart only led the league in K's, once. Stuart who hit 228 homers in ten seasons with the Pirates, the Red Sox, the Mets, the Dodgers and the Angels, led the league with 121 whiffs while playing for Pittsburgh in 1961. He slugged 35 home runs that year but was traded to Boston after the following season where he belted 42 homers and struck out 144 times. He struck out 957 in 1112 big league games.

August 1967 was a time of hope and a time of despair for the California Angels who came so close but yet in an instant fell from grace with hope fading with each major league day. The club was filled with promise but was streaky at best. A previous column described how starter George Brunet had one of the worst hard luck seasons ever and this team saw a lot of that. 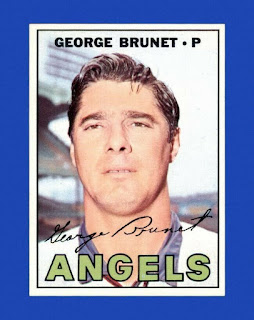 July saw the Angels with winning streaks of six and seven games. They also had bouts where they lost 9 of 10, and 10 of 13. However it was the promise of hope in mid-August which finally ended the season prematurely for the boys of Anaheim.

It began with a win over the Yankees on August 9th, 7-0, but it was most meaningful the next three games. The Angels would only score six runs in the three contests but they would sweep the Red Sox who would go on to win the AL pennant.

In the first game it was a wild pitch by Lee Stange which undid a fine pitching performance where the Red Sox starter allowed only four hits in seven innings. It was ace Jim McGlothlin's time to shine however, as the right-hander allowed only three singles in going the distance to shut out the powerful Red Sox.  He faced only three batters over the minimum with the lone run coming on singles by Don Mincher and Jimmie Hall followed by a wild pitch to Roger Repoz to score the run, 1-0. 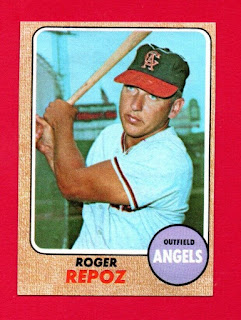 Game Two saw another pitching duel between the Halo's Jack Hamilton and Gary Bell. A Mincher home run would even the score until the sixth when Tom Satriano led off with a double and Rick Reichardt (who wasn't playing much at the moment) went in to pinch run. Jose Cardenal sacrificed Reichardt to third. He scored on a single by Jim Fregosi. It was the only other run of the game and the Angels won it 2-1 as Marvelous Minnie Rojas picked up his 21st save.

Game three provided a bit more offense, but not much. The Angels were in control from the start with an inside the park homer by Cardenal and a solo shot from Repoz giving Anaheim a 2-0 lead. In the fourth inning Repoz singled and moved to third on a pair of ground-outs, only to ride home on ace Jim Lonborg's wild pitch. It would be the second of the three games where the winning run was scored on a Boston wild pitch. The only Red Sox runs came on a two run shot in the ninth by Rico Petrocelli. Ricky Clark pitched shutout ball into the eighth before giving way to Jim Weaver. 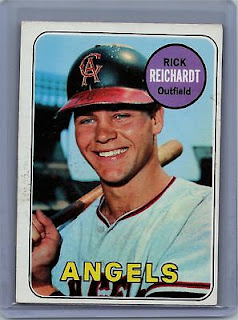 The sweep put the Angels to just 1.5 games out of first at 62-53. It would be the closest they would come. It would start to unravel with Brunet, who as usual pitched a masterful game, losing to Minnesota 2-1. Both unearned runs scored on a Fregosi error. The Twins Jim Perry would shut them out in the next contest 6-0, followed by a complete game performance by ex-Angel Dean Chance 5-1. It marked the return to the line up of Reichardt who went 1-4.

The team moved onto Fenway where the Red Sox found the friendly confines and returned the favor, winning 3-2 with Gary Bell tossing a 4-hitter. It was the Halo's 4th straight loss. The next game was a slugfest 12-11 and while the Angels out-homered the Sox (4-2), they still lost. Home runs by Reichardt (12th), Fregosi (8th), Repoz (6th) and Hall (16th) were not enough.

Next up Brunet versus Stange. Brunet was uncharacteristic in this one, as the Sox came up with a 12-2 win (second straight game scoring 12 runs), led by MVP and Triple Crown winner, Carl Yastrzemski's 30th homer. Next up another loss as Boston continued to pound Angel pitching, 9-8. Rojas was called on to pitch three innings to save this one, but wasn't up to it. The final run coming on a Jerry Adair homer. Reichardt continued his torrid hitting going three-for-five, with 2 RBI.

It was the seventh straight loss. The Angels fell to 62-60. A win at Cleveland would end the streak. However, the Angels went from 1.5 back to 6.5 back and would never get closer. The end had essentially come six weeks before the season officially ended. The team would put together some short winning streaks followed by short losing streaks and when the dust settled on the 1967 season they would finish 7.5 games back of Boston, 84-77 in 5th place.

During the losing streak, Angel's Bonus Baby Reichardt, who only pinch ran during the winning streak, batted .400, 8-20 and 5 RBI with a homer. For the season he hit 17 dingers, good for second on the club behind Mincher whom he also trailed in RBI 76-69, in what was only his second full season in the big leagues.

Please share this blog with your friends and colleagues and leave a comment at the bottom of the blog if you have one. Thank YOU VERY MUCH!! Please pick up a copy of my book "Tales of My Baseball Youth; A Child of the 60's" at www.bobbrillbooks.com, or on Amazon.
Posted by Baseball in the 1960s at 1:13 PM