TRIVIA QUESTION: When Harmon Killebrew got injured stretching for a throw at first base in the 1968 All-Star game, the throw came from shortstop. Who was the shortstop?

ANSWER TO TRIVIA QUESTION IN THE PREVIOUS COLUMN: In 1962 legendary manager Birdie Tebbetts oversaw the Milwaukee Braves to a fifth place finish with a record of 86-76. It was a one year stint for Birdie as he replaced Chuck Dressen and was replaced in 1963 by Bobby Bragan. While Tebbetts, who took over in the final weeks of the 1961 season, improved the Braves by three games, Bragan actually failed to reach the 1962 mark of 86 wins set by Tebbetts. Bragan managed 84 wins.

Having met the man and hosted him in my baseball card store for a public signing, I can attest to the fact Harmon Killebrew was one of the nicest guys I ever met, and certainly one of the most pleasant ballplayers to grace the diamond. On that diamond however, he terrorized the pitchers of the 1960's arguably more than any other. I once said of him "Harmon Killebrew was so strong he could 'break' a baseball with his bat." He may never have done that but if it could happen, I'd bet dollars to donuts he'd be the first.
(Home Run Derby Killebrew vs. Mays)
While his reign began in the 1950s it's the 1960s we concentrate on in this column and when 1960 rolled around it set Killer off on a string of homer years for the decade. Every year save one, he pounded the ball deep. That one year was 1968 (the year of the pitcher) when an injury in the all-star game almost cut short his career. 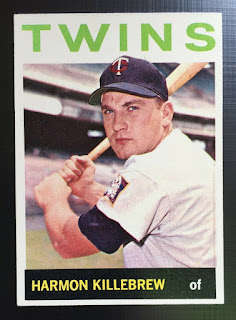 When the decade turned the corner from the 1950's Killebrew fell off. The 24 year old slugger, coming off a league leading 42 homer season slipped to 31 in only 124 games. He even trailed teammate Jim Lemon who had 38. Then however, it was Killebrew off to the races.

In the Home Run Race of 1961 when Roger Maris hit 61 and Mickey Mantle blasted 54, few remember it was Killebrew in third with 46 (tied with Jim Gentile) and 122 RBI. The next three years saw HR totals of 48, 45 and 49. He led the AL in each season. Two of those seasons he led the majors.

A dip to 25 in an injury shortened 1965 pennant winning season which saw him only play in 113 games, preceded a rebound to 39 in 1966. The following season it was a first place tie with 44 homers with Triple Crown Winner Carl Yastrzemski.

The 1968 season was awful. It was thought an awkward stretch at first base in the All-Star Classic might be career ending. Killebrew was never the same during the season and played in only 100 games, hitting 17 homers and batting a lowly .210. 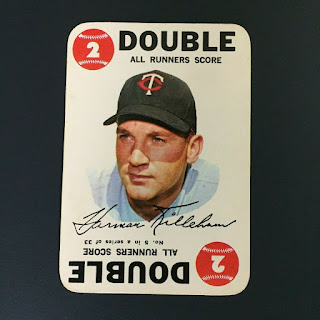 However, he would not be denied as he led the Twins to the AL West title in 1969. He rebounded to bang a league leading 49 homers, 140 RBI and a .276 BA. His league topping on-base percentage was an amazing .427 as he drew 145 walks (20 of them intentional)! At age 33 Killebrew played in all 162 games. It was the third time in his career he played in all of his club's games. He was named AL MVP for his efforts.

He followed up the decade with 41 more homers in 1970 but began to fade with age. When he called it a career, Harmon Killebrew finished with 573 home runs, 1584 RBI and 1559 bases on balls. His .256 lifetime BA was considered respectable for a slugger of his caliber. Six times he either led or tied for the league lead in home runs, nine times he drove in 100 or more runs, in seven seasons he drew over 100 walks and only once did he ever top the league in strikeouts.

He played all but one season, his last, as a Washington Senator/Minnesota Twin (a final season in Kansas City) and after 22 seasons he was elected to the Hall of Fame in 1984. Harmon Killebrew died May 17, 2011.