TRIVIA QUESTION: When Cuban born Tony Perez arrived with the Reds in 1964 there were two other players on the club who were also born in Cuba. Who were they?

ANSWER TO TRIVIA QUESTION IN THE PREVIOUS COLUMN: Bobby Richardson was the Yankee's lead off hitter for much of his career. During the 1960 World Series, when he was named the only Series MVP on a losing team, he only led off once in the seven game series.

You knew from Game One of the 1967 season, it was going to be Tony Perez's breakout year. He started off with a seven game hitting streak over the first eight games. He did not play in one of the eight. He was hitting .333 and the Cincinnati Reds were 6-2 to start the season off right.


While Perez did most of his career damage with the group known as the Big Red Machine in the 1970's, the groundwork for that special group of guys was laid in the 1960's. The Cuban born Perez arrived in Cincinnati as a 22 year old kid in 1964. He got a real taste of the big leagues the following year sending 12 homers out of the park in 104 games while batting a respectable .260. His power fell off drastically in 1966 but when 1967 rolled around he was moved from first base to third and a star was born. 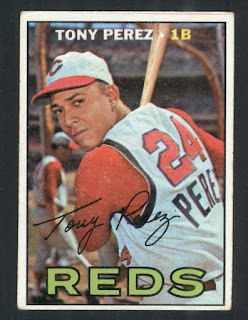 Typical of his '67 year was a game on May 5th at home against the Pirates. The two clubs battled into the 10th tied at 7-7. Perez had been a machine with three hits, three runs and an RBI. In the bottom of the 10th, facing Juan Pizarro with Tommy Harper at second and two out, Perez banged a double deep to the outfield and Harper came around to score the game winner.

It was in the middle of a five game win streak while the Reds were winning nine of 11 and ran their record to 22-10. Before the season was over Perez breakout was complete. He hit 28 doubles, 26 homers and 102 RBI, while batting .290.

It was the first of his seven 100+ RBI seasons. Nine times Perez would hit 20 or more homers, topping the list with 40 in 1970, when the BRM was in full swing. Around him as part of that future squad in 1967 was Pete Rose and Lee May, Tommy Harper, Gary Nolan, Jim Maloney and a young kid who came up for a cup of coffee named Johnny Bench. 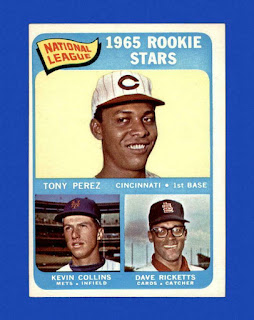 Perez would play 23 years in the Bigs, finishing his final season at age 44. He left the Reds for the Expos, Red Sox and Phillies, but came back to play his final three seasons in the place he knew as home; Cincinnati. He was elected to the Hall of Fame in 2000. Not bad for a kid from Cuba who grew up in a two bedroom home owned by the Sugar mill where his father, and he eventually would work before coming to the USA in 1960 under contract with the Reds.

Please share this blog with your friends and colleagues and leave a comment at the bottom of the blog if you have one. Thank YOU VERY MUCH!! Please pick up a copy of my book "Tales of My Baseball Youth; A Child of the 60's" at www.bobbrillbooks.com, or on Amazon.
Posted by Baseball in the 1960s at 1:03 AM