TRIVIA QUESTION: Who managed the Milwaukee Braves during the 1962 season?

The Aaron Brothers (Hank and Tommie) are often the answer to a trivia question of which pair of brothers hit the most home runs in major league baseball. Of course with 755 for Hank and Tommie's 13, it was an obvious answer. Few remember the impact Tommie had however and perhaps being overshadowed by his much more talented brother pushes the point. Tommie was a good player in his own right but his most memorable game likely came during his rookie season; 1962. 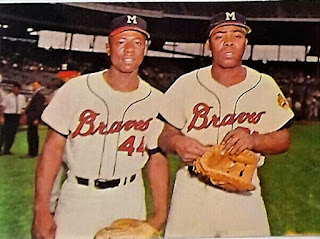 Only a few more than 6000 people saw the Philadelphia Phillies invade County Stadium in Milwaukee Thursday afternoon, April 26, 1962. Few who were there would forget it because the home town Braves destroyed the visiting Phils 10-4 in an early season contest. 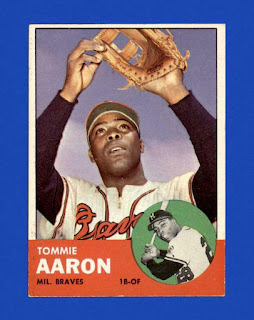 Tommie, who would play six different positions in his career including three in the outfield, was the lead-off hitter for Milwaukee facing Jack Hamilton. It was Tommie Aaron's game from the start. He led off the bottom of the first with a single. After Mack Jones grounded out sending Tommie to second and brother Hand K'd, Eddie Mathews singled him home with the first run of the game, 1-0. Mathews would come around to score on a Frank Bolling double giving the Braves a 2-0 lead.

The lead help up until the third when Don Demeter singled in a run to make it 2-1. Tommie struck out in the second but it was only one of two times Phil's pitchers got him out that day. In the fourth Bob Hendley singled home Joe Adcock making it 3-1 and Tommie came to the plate facing Hamilton again. This time with Roy McMillan on second and Hendley on first, Tommie belted a Hamilton pitch high and deep to left for a three run homer, 6-1 Braves. 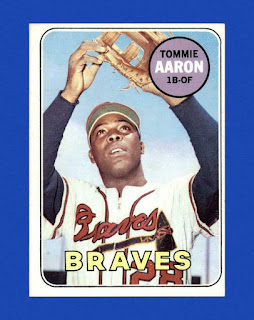 (Topps often used the same picture for many different years of cars.)
It was Tommie Aaron's first career home run and the first of 13 in his career. In the fifth Del Crandell doubled in two more and the route was on. In the inning Tommie moved from left field to first base after Adcock was lifted for a pinch runner. But he was not through.

In the sixth, Tommie again came up with Hendley on base and promptly tripled him home, scoring himself on a flyball by brother Hank. It was 10-1. In the eighth Tommie grounded out and when the final score was clocked in, the Braves beat the Phillies 10-4.

For Tommie Aaron it was a career day. His first home run, and he lit up the box score going three for five, scoring three runs and had four RBI. He homered, singled and tripled, registering eight total bases. In his career he became the first sibling to join his brother in a league championship series. The 1962 season was by far his best. He hit eight homers and while only batting .231 he had 20 doubles and played in a career high 141 games. A third of his lifetime at bats, and more than half of his home runs came during his rookie season. He retired after the 1971 season with seven years in the big leagues.

Neither team did much with the Phils finishing in 7th, the Braves in 5th, but for Tommie Aaron that April day in 1962 was special. He died of leukemia at the age of only 45.