At the Trade Deadline; Dick Stuart

TRIVIA QUESTION: Dick Stuart struck out more than 100 times in five different seasons. How many times did he lead the league in strikeouts?

ANSWER TO TRIVIA QUESTION IN THE PREVIOUS COLUMN:  In a game which now prides itself on players making millions of dollars early in their careers, 1964 was a different time and place. AL MVP Brooks Robinson made a salary of $35,000 while 33 year old NL MVP Ken Boyer made $70,000.

This past week and and a half we've heard nothing but who is going to be traded as the deadline approached and who were the "buyers" and "sellers." In the 1960's it wasn't as pronounced, but it was there as well. Smart GM's were looking for that one veteran who could help down the stretch and give the team just one more win than the other teams in the league. The Dodgers GM Buzzie Bavasi and Scouting Directer Al Campanis were masters at this.
(Slugger Dick Stuart in Home Run Derby with HOFer Frank Robinson)

The 1966 season is a case in point. While they picked up Wes Covington at the end of his career, the former Phillie slugger had very little left in the tank. However, aging home run hitter Dick Stuart did. Looking for help in the second half Bavasi would give manager Walt Alston all the help he needed. Perhaps he didn't trust the Dodger bats, remembering how weak they were in 1965. He signed Stuart as a free agent in July. Doctor Strange-glove wasn't signed for his defense (they had Wes Parker for that), but he figured to spell Parker and add pinch hitting to his duties. 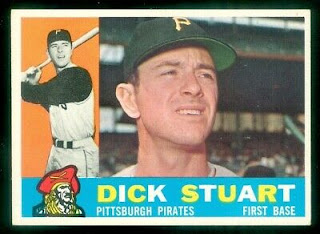 On Friday, July 15th before 50-thousand fans at Shea Stadium in New York, Stuart paid dividends and made it all worth while. With Don Drysdale and Jack Fisher locked in an early  pitching duel the two clubs went into the 9th tied at 3-3. By this time both starters had given way to relievers. Neither team could end it in regulation.

The Mets sent Jack Hamilton to the mound in the 10th facing Phil Regan. The 10th passed and into the 11th Hamilton got Parker to ground out. Ron Fairly drew a walk and Jim Lefebvre doubled sending Fairly around to third. Jim Barbieri drew an intentional walk to load the bases for Regan's spot. Alston sent Stuart up to pinch hit. Stuart, who had clobbered pitchers in Forbes Field for the Pirates and pounded the Green Monster in Boston, sent a pinch single to center scoring Fairly with the go-ahead run, 4-3. Nate Oliver ran for Stuart and Bob Miller held the Mets scoreless in the 11th to win it.

Now you may not think it was a big deal, but even if Stuart never got another hit, it was important because the Dodgers won the pennant in 1966 by just 1.5 games.

But that wasn't all, six days later Stuart would drive in a run in a 4-3 win over Pittsburgh, on July 25th he homered off Chris Short to tie the game with Philadelphia before getting a single to drive in the go-ahead and eventual winning run. The following day he homered off Larry Jackson for one of his two hits in a 3-2 Dodger win. Two more hits in the next game which the Dodgers won, and on the final day of the month he homered off Steve Carlton, and had three hits and three RBI in a 6-4 Los Angeles win. 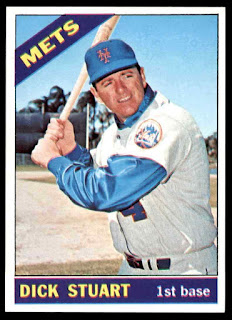 Alston would have trouble keeping Stuart's bat out of the line-up as he continued to play well. By season's end Dick Stuart had banged 24 hits, three homers and nine RBI, while hitting .264. His hitting accounted for more than the two games the club needed to put them into the World Series. He would go 0-2 in the Series where the Orioles swept the Dodgers in four straight. And in case you were wondering, on defense Stuart handled 214 chances with only two errors for a .991 fielding percentage. It was his highest percentage in the 10 years he played. Covington would hit .121 with a homer and four RBI.

Stuart was released by the club in the winter and picked up by the Angels where he spent the first few months of the season before being released a final time and calling it quits. A key cog in the 1960 Pirates World Series run, he really did damage in Boston. He led the AL in RBI in 1963, hitting a career high 42 home runs. His 35 homers and 117 RBI in 1961 were added to a .301 batting average. His final season in Boston (1964) he cranked 33 homers, 114 RBI and a respectable .279. It must be noted he led his league seven times in errors committed at First Base.