ANSWER TO TRIVIA QUESTION IN THE PREVIOUS COLUMN:  In the game in 1969 when the Dodgers fell to the Giants 14-13, there were four players on the field who played for both teams during their career. Aside from Len Gabrielson, Tom Haller and Ron Hunt, the fourth player was Manny Mota. Mota began his 20-year career with the Giants and finished it with the Dodgers stopping in Pittsburgh in between.

Its not often two players who work the same infield position become the Most Valuable Player in their respective leagues. In 1964 this was the case. The Oriole's Brooks Robinson and the Cardinals Ken Boyer were not only named the MVP of their leagues but they both played third base. Boyer went on to the World Series, Robinson's Baltimore club finished third despite winning 97 games and finishing just two games back of the pennant winning Yankees.
The two players had remarkably similar statistics. Robinson played in 1963 games (the club played a tie game during the season) and drove in 118 runs to lead the AL. Boyer played in all 162 games for the Cardinals and led the NL with 119 RBI.

The other statistics are extremely close as well. Only 22 Plate Appearances separated them and when it came to official AB's Boyer had 16 more than Brooks. Boyer scored 100 runs compared to 82 for Robinson who didn't have quite the other hitters around him the Cardinals placed around Boyer. 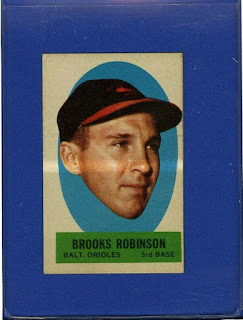 Their On Base Percentage was as close as you can get; .368 for Robinson to .365 for the Cardinal third sacker and their slugging percentage was close too. Robinson was higher at .521 to .489.

When it came to fielding both were known as among the best defensive third baseman of their era, if not all time. They had basically the same amount of chances. Boyer had 494 to Brooks 492 while Boyer made more errors with 24-14. Their Fielding Percentage was a little low that year with Boyer at .951 to the O's third baseman's .972. 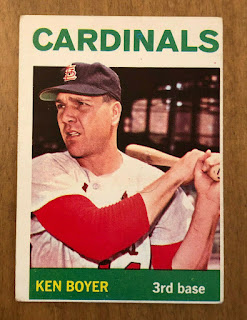 The 1964 season would be the only time Boyer made it to the post season where he batted .222 in the Cardinals win over New York, but did hit a Grand Slam homer. Robinson would make it to the post season six times, including four World Series appearances. In 39 post season games Brooks Robinson would hit .303 with five homers and was named the 1970 World Series MVP. He also put on a defensive display unrivaled in modern times.
They were two of the best at their positions and in one unbelievable season, they were about as close as you can get.