Cook-ing Up A Big Red Storm

ANSWER TO TRIVIA QUESTION IN THE PREVIOUS COLUMN:  While Walter Alston won World Series titles in 1963 and 1965, his prowess began in 1955 when he managed the Boys of Summer taking Brooklyn to its long awaited first championship. His other World Series title was over the 1959 Go-Go Chicago White Sox. He won four World Series and three other NL pennants; 1956, 1966, 1974. He took over the Dodgers in 1954 and gave way to Tommy Lasorda with four games left in the 1976 season. He managed the club to 88 wins in his final season and passed away in 1984.

The 1960 Reds were a strange team. They would finish in sixth place but over the course of the season they were involved in 17 games where either Cincinnati or it's opponent scored at least 10 runs. The Reds were on the winning side of 8 of those 17 games. None however were more bizarre than on Sunday August 7th against the St. Louis Cardinals. It was the first game of a double header.

It was a day little known Cliff Cook, a lifetime .201 hitter, would have a career day. The game started off harmless enough. The Reds sent seven game winner Jay Hook to the mound against the Cardinals Larry Jackson. Jackson was gunning for his 14th win. The Cardinals would strike first. 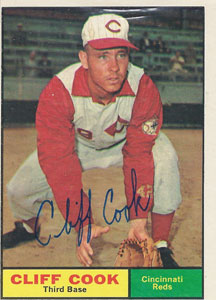 Stan Musial drew a walk leading off the bottom of the second and Walt Moryn took Hook deep to right for his sixth homer of the year. The Cardinals had staked Jackson to a 2-0 lead. It wasn't to last long.

In the top of the third three straight hits including doubles by Vada Pinson and Wally Post, plus a fly ball by Gordy Coleman led to a pair of runs to tie the game. Cook singled in Post to put the Reds ahead of the Redbirds and before the dust settled both Leo Cardenas and Eddie Kasko got hits and drove in runs as the Reds batted around. Ron Kline relieved Jackson to end the inning but the Reds had scored seven to take a 7-2 lead.

Post doubled again the fourth, Ed Baily drove in a run and Cook hit a sacrifice fly to drive in another. The Cards scored a run in the bottom of the fourth on an RBI single by Kline who was destined to take the brunt of the Reds assault in game one. 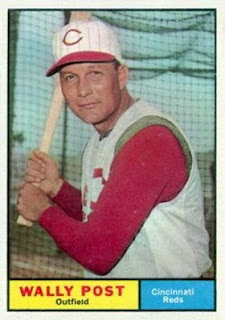 Two innings later Post hit his third double of the game and Cook drove him in with a double of his own as the Reds upped their lead to 13-3. The eighth inning saw Cook slap a single for his fourth hit. He was forced out at second but singles by Frank Robinson, Roy McMillan and a walk to Harry Anderson loaded the bases for Jerry Lynch. Lynch promptly took Kline deep for a grand Slam and an 18-3 Reds lead.

The Birds would score one in the ninth to make it 18-4 but not before Cook got the chance for a sixth plate appearance to which he promptly singled for his fifth hit of the game.

For Cook, mainly a third baseman, the game constituted five of his 80 lifetime hits and 4 of his career 35 RBI. He'd finish the game 5-for-5, two runs scored and four RBI. The 1960 season was his most productive, batting 161 times. He was traded to the Mets in 1962 along with Bob Miller for Don Zimmer. He was out of baseball after the 1963 season after batting just .142. 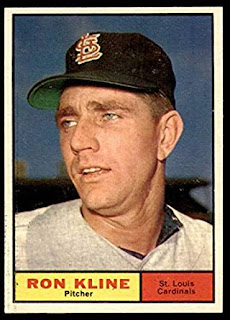 For Kline, a journeyman pitcher who started and relieved over 18 years for nine different clubs,  the game was a disaster. In five-plus innings, he gave up 11 hits, 11 runs, nine earned. At least he was spared the loos, suffered by Jackson.
In the night cap, the Cards found revenge with a 4-2 win. Kline mercifully had the night off. Cook went 0-for-3 and was lifted for pinch-hitter Lynch in his fourth at bat. Interestingly enough, it was in the ninth when manager Fred Hutchinson sent three consecutive pinch-hitters to the plate with only limited success (Frank Robinson drew a walk).

Please share this blog with your friends and colleagues and leave a comment at the bottom of the blog if you have one. Thank YOU VERY MUCH!! Please pick up a copy of my book "Tales of My Baseball Youth; A Child of the 60's" at www.bobbrillbooks.com, or on Amazon.
Posted by Baseball in the 1960s at 10:23 PM