TRIVIA QUESTION:   Lou Brock came to the Cardinals in 1964, one year after Cardinal great Stan Musial retired. Who was the other Cardinal great and future Hall of Famer who retired as a Redbird the same season as Musial?

ANSWER TO TRIVIA QUESTION IN THE PREVIOUS COLUMN: Carol Taylor, the super utility man who played for Pittsburgh in 1969, is the step brother of former Oriole's slugger, Boog Powell.

When Red Sox fans talk about the "curse of the Babe," they were right to refer to deal which sent pitcher/hitter Babe Ruth to the hated New York Yankees for $100,000 in 1919. It wasn't until 2004 the Red Sox finally won a World Series. The Yankee story is legendary, led by the years Ruth starred for Murderer's Row. For the Chicago Cubs, there was a similar deal; the "Curse of Lou Brock" you might say.

The Cubbies had not won a World Series since 1908. It was a dominant time for Chicago. The Cubs won in 1907 and the White Sox did it in 1906. But the Cubs would not win another Series Championship until 2016. A 108 year drought or longer than the Red Sox. During the 1960's the Cubs had some super star laden teams with Billy Williams, Ernie Banks, Ron Santo and a young outfielder named Lou Brock. Add pitchers such as Fergie Jenkins and you had the makings of a team which should have won at least one pennant.

Brock came to the Cubs as a free agent in 1960. The 1961 season opened with an outfield of Billy Williams, Richie Ashburn and Al Heist. A superstar in the making on his way to the Hall of Fame, an aging star also headed to the Hall and a player who came to the big leagues at 32 and would be out of the big leagues at 34 after a rather pedestrian three seasons in the Cubs outfield. There was clearly room for a breakout rookie. 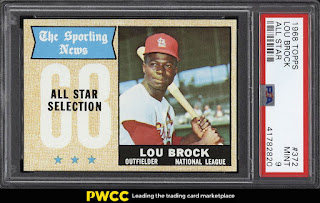 Brock played sparingly in 1960 making his debut on September 10th, inserted into the starting line-up as the center fielder and lead off hitter.  Just over 7,000 fans saw Brock break in. He faced the great Robin Roberts and promptly smacked a single to center in his first at bat. The rest of his at bats, in his one-for-five debut, were non de script but he did score a run.

In 1961 in four games he hit .091 and in his first full season, 1962, he was still getting familiar with the big league pitching. The son of a share cropper, he had dominated in his only minor league campaign, winning the batting title with a .361 average in the Northern League.

The 1962 season saw the young outfielder hit .263 followed by .258 with nine homers in each year. As swift as he was, Brock stole 16 and 24 bases in those two years. It wasn't enough for Cub's management. They needed pitching and the Cardinals needed an outfielder. 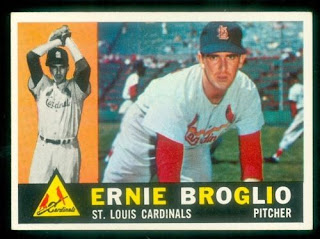 On June 15, 1964, the Cubs made what was long thought of as one of the worst trades in major league baseball history. They sent Brock, along with Jack Spring and Paul Toth to the St. Louis Cardinals for Ernie Broglio, Doug Clemens and Bobby Shantz. Broglio was the key. The tall right-hander had won 21 games to lead the NL in 1960. After an off-season in 1961 he came back to win 12 and then 18 in 1963. The Cubs wanted him and they got him. Brock was expendable.

Broglio won three more games in the following two seasons and was out of baseball when the 1966 season ended. Brock had a life-time .293 average with 149 homers, while Broglio won 77 and lost 74 in his career. 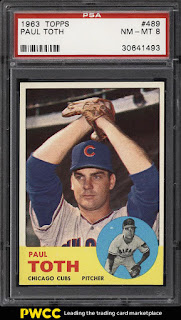 As for the others in the trade; Bobby Shantz retired at the end of the 1964 season, Doug Clemons played one less than illustrious season in Chicago before ending up three more pedestrian years in Philadelphia, Jack Spring pitched a total of 24 more MLB innings and Paul Toth pitched 10 more innings for the Cubs giving up 10 runs before calling it quits in 1967, having never pitched in the big leagues again.
Thank you to those of you who purchased my book after reading this column. It has been appreciated.