TRIVIA QUESTION:   Ken McMullen was traded twice in huge transactions involving two of the most powerful home run hitters of the era. Who were those two sluggers?

ANSWER TO TRIVIA QUESTION IN THE PREVIOUS COLUMN: When Nolan Ryan made his Mets debut in 1966 the first hit he allowed in his few inning pitched was to pitcher Pat Jarvis. The first home he allowed was to the Atlanta Braves Joe Torre. Torre would go onto become a batting champ, a great manager and one of MLB's most important executives.

Don Blasingame was a pretty good second baseman during his time and it looked like he may have been getting ready to settle in after the 1962 season with the Cincinnati Reds. However, the Reds had other plans for that position; a kid name Pete Rose was about to make his MLB debut. It spelled the end of the line for Blasingame in Cincinnati.
(at 1:33 of the above video "Don Blasingame leads off the series and loses his bat!)

This wasn't the first time Blasingame would be moved because of a young kid coming up with high expectations, nor would it be the last. As a solid player in St. Louis, he was coming off one of his best seasons hitting .289. The Cards had an up and coming youngster at second whom they picked up in a trade with Pittsburgh. Julian Javier would enjoy a really nice career with the Cardinals for several seasons and was a defensive wiz. Blasingame was expendable and was quickly dealt to the Giants.

He only logged three games with the Giants before being dealt again, this time to the Reds. Joey Amalfitano was locked in at second base and was two years younger than the 29 year old Blasingame. The Giants simply didn't need him and it seems the Reds needed a stop gap player until Rose arrived. 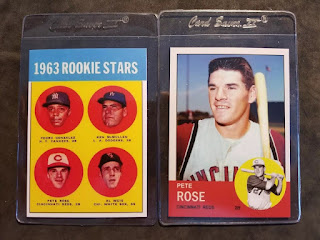 When the Reds shipped him to the Senators he replaced Chuck Cottier and stayed at second base until the 1966 season when the Senators drafted 25 year old Bob Saverine from the Houston Astros and he replaced Blasingame who was now 34 and coming to the end of his career. Saverine turned out to be a bust. He hit .239 in parts of six seasons with several clubs.

It ended when after 68 games played with Washington he was sold to Kansas City in August, played 12 more games and was released in September.  The A's had light hitting Dick Green at second and perhaps were looking for a little insurance. Of course with Charley O. Finley running things you never knew what was going to happen. 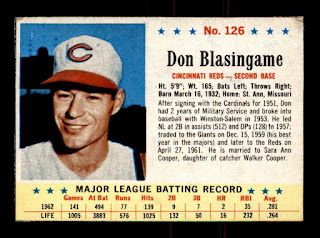 Blasingame's less than illustrious career seemed to chug along well until there was somebody waiting in the wings management felt was just a step better and a shade younger. It should be noted at this point, when he himself became a regular in St. Louis it was at the expense of future Hall of Fame second sacker, Red Schoendienst. Schoendienst was promptly traded to the Giants before going on to a career with the Braves.

Blasingame finished his career .251, 21 homers and 308 RBI and played in one World Series (1961). In his final appearance he got a pinch hit single off Minnie Rojas of the Angels on August 27th, 1966. He did not figure in the scoring. He ended his career the way he started it back on September 20, 1955 when as a lead off hitter for the Cardinals he got a first inning single off Sam Jones of the Cubs. He scored when Solly Hemus followed with a home run. The game ended 2-0.


His major milestone was in a statistic few people think about but it's important. He hit into fewer double plays (one in every 123 at-bats) than anyone in major league history except Don Buford. 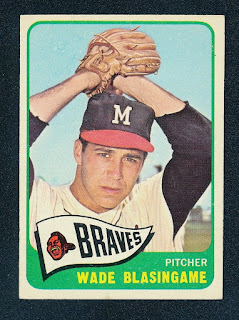 There isn't much else to say about Don Blasingame except for these two points; He was not related to the Braves pitcher Wade Blasingame but he was the son-in-law of Walker Cooper. And the other point is probably only significant to this writer; the very first baseball glove I had when I started playing Little League was a "Don Blasingame" Signature Model. Now that is cool.